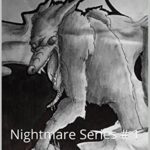 The very first installment of the Jacoby Ash series! In the thirteen hundreds a man named Jacoby Ash is attacked by bandits who do their best to kill him before murdering his family. While he lay dying he made a deal with the Devil to seek out revenge on those responsible. His deal was granted, under one condition, that he live as an immortal hit man, killing those Natural and Supernatural beings who upset the balance of the Devils Earth. Join Jacoby Ash in Therianthrop as he takes on the ancient werewolf, Aeonexus, before he continues to feast on the children of New Hope

The second installment of the Jacoby Ash series. Roy came back from the dead as a gun toting, plague spreading, undead Revenant, out to kill, kill, kill. Roy’s actions elicit the attention of the forces of Hell, and they send out their Assassin, Jacoby Ash to take care of this monster once and for all. Join Jacoby as he battles the undead gunslinger before more die in his wake.