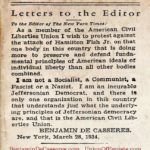 Magister Kevin I. Slaughter, historian of Benjamin DeCasseres and other egoist philosophers, passes along this 1930s letter from that old Imp to the New York Times, which today just published an op-ed asking the ACLU to take a

We hope they stick to defending ACTUAL free speech. Our Magister is one of the ACLU’s newest members, but not the only one from our ranks.

To the Editor of the New York Times:
As a member of the American Civil Liberties Union I wish to protest against the attack of Hamilton Fish Jr. on that one body in this country that is doing more to preserve and defend fundamental principles of American ideals of individual liberty than all other bodies combines.
I am not a Socialist, a Communist, a Fascist or a Nazist. I am an incurable Jeffersonian Democrat, and there is only one organization that understands just what the underlying principles of Jeffersonian democrazy are, and that is the American Civil Liberties Union.
Benjamin DeCasseres
New York, March 28, 1934