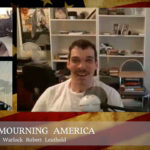 Join your hosts Lorcan Black and Jeff Bowling, along with their guest Warlock Robert Leuthold, as they discuss: 2018 Memorial Day observance / Investigation into alleged spying on the 2016 Donald Trump campaign by the FBI / Federal Court ruling against President Trump “blocking” users on Twitter / Roseanne Barr’s rant on Twitter, and subsequent cancellation of her hit ABC show “Roseanne.”

Good Mourning America is your source for news and current events from a Satanic perspective, every week, only on the Third Side Network.