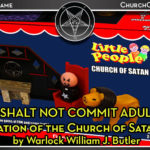 THOU SHALT NOT COMMIT ADULTHOOD

The Creation of the Church of Satan Playset

In my earliest memories toys have always held a special place in my heart. The designs appealed to me visually, themes and colors were alluring to my taste, taking possession of my interest wholeheartedly. They inspired a magical fascination in me. What was this sorcery and why was I so enthralled by its enchantment? I know, I know. It was a well constructed capitalist plot of companies that had researched and deployed their seductive products en masse, enticing juvenile desires everywhere. Well, it worked, hook, line, and sinker.

All of this, coupled with being born a decade short of a world captivated by space exploration, fostered obsessions with toys based on fantasy, space travel, the future, monsters, super humans, magic, technology, and the strange unknown. The timing was right, creative ingenuity in the toy market seemed to be unleashed upon the world. Mass popularity of these new toy designs speaks for itself. Quickly approaching forty years after their original introduction, many of these beloved objects have become iconic namesakes, resulting in decades of new generation’s enjoyment and unwavering affection.

Blast from the Past in Burbank, CA

Toys held varied meanings to me as a youngster, introducing me at a young age to a wide range of human emotions and reactions. Seeing an item for the first time inspired awe, then feelings of desire, finally receiving an item generated excitement. On the flip side, not receiving an item provoked disappointment. Knowing that a toy was forthcoming, spurred anticipation. Connecting with others based on mutual interests promoted socialization, thus, engaging in play with others offered camaraderie. Mixing our treasures together cultivated sharing. Establishing new relationships, created Friendships. That’s just the beginning.

Fantasies inspired further creativity; I even made up elaborate “movies” with “songs”. Assembling play sets offered early experience in mechanics, diagrams, and following directions.  Toys made me happy for no other reason than, they were. Just looking at them offered me comfort. If I was unhappy or alone, they offered company. If times were bad, escapism was literally in my hands. Long story short, toys brought me joy! Toys have always been loyal to me, and the loyalty I showed to them while young has developed into a lifelong passion. Toys introduced me to the pride of ownership, and to the inherent thing I am, a collector.

At the age others started let go of childish things I held on longer, although quietly. During the awkward teenage age years I would find myself occasionally perusing toy isles to see what was current, a tradition which would continue my entire life. A younger sister, with a thirteen year age difference, allowed a new outlet for hunting, buying, sharing and bonding. In my mid twenties, before the late nineties Star Wars explosion, I recollected the entire action figure line, the main stay of my childhood, to recapture the nostalgia of my youth. Of course I didn’t have them all as a kid, but I could now make that happen as an adult. When the time was right they were sold to fund a different type of collection. In the years after I would still peruse the store isles, occasionally buying something of interest to display on a shelf, until I eventually got carried away with PVC Anime figurines from Japan, which filled an entire curio cabinet.

Most of the recollection of what was available to the youth of my day came from not owning toys, but from department store Christmas catalogs which were put out yearly. Each thick wishbook would have the entire back portion dedicated to the dreams of enchanted adolescents. Every new line for the year was made available for my viewing pleasure in stylized, colorful, pictorials. This was as important to the memories as the toys themselves. In the past one had to reflect upon faded reminiscence to revisit important nostalgia. Possessions of the past became either rare or non existent. Presently the internet provides instant access to things once lost to the past, including the pages of the catalogs themselves.

Fast forward to the last few years, I was invited to an antique toy mall, which impacted me in a strange way. The toy mall was sizable warehouse! It was like stepping out of reality straight into my past. Every conceivable thing one could remember from the seventies and eighties were present, as well as other eras. All the things I remembered, and better yet, things I forgot existed. I can’t explain the feeling. I was lost, swimming in delight. I was happy. A small shiny metallic Eagle Force soldier caught my attention. It was unfamiliar, but intriguing. As I stood there looking a cloud was lifted, like a dream sequence in Scooby Doo. Not only did it become familiar, I used to have one! It was an emotional revelation. The flood gate was now open and I started to recall numerous toys and began hunting the ones that were less popular or that I could only vaguely describe. Searching for the items I couldn’t quite remember, I stumbled on and saved many images of the previously mentioned catalogue ads. The spiral began.

Shortly after, I attended a toy and comic convention and happened upon some GI Joe figures. I decided to purchase about eight Cobra figures to display in my garage on my tool chest next to my motorcycle. I got home, took them out of the package, set them up, and was surprised with how much they still impressed me. I was a big fan of the eighties comic series, and long story short, I now have the most outrageously large collection of Cobra figurines and vehicles you can imagine.

I started to gather lesser known collections in turn creating a real life wish catalog of my own. Smaller numbers exist in those sets with a concrete beginning and end, unlike some open ended collections. All of the things I wished I could have had as a child could be a reality now. Micronauts, Buck Rogers, Black Hole, Tron, Flash Gordon, Clash of the Titans, D&D, Battlestar Galactica, M.U.S.C.L.E, Sectaurs, Master of the Universe, Eagle Force, Blackstar, Other World, and Universal Monsters are some examples. Having access to these items in my possession essentially evokes the power of a Total Environment. To gaze upon the displays, which I ritualistically do most days, provides an instant porthole to a time long gone. The imagery, smells, and memories, all of the magic associated with these items, comes flooding back in an instant, a time of simplistic innocence. It still resonates with me. The sentiments remain the same; Comfort, pride, joy, ease.

Exploration of the bygone era escalated to the far reaches of my childhood, rekindling a connection with the earliest stages of life. Fisher Price was a company that made toys aimed at zero to six year old children. Many of these products, partially forgotten, were redeemed, including the now iconic Little People playsets.  Although not what I particularly had my sights set on, they are ever present in my hunting grounds, and a joy to see. With that said, a character I saw commonly was the balding dad figure with a green body. Every time I would encounter one I would laugh to myself, envisioning it as Anton LaVey. Progressing from thinking I should make it happen, eventually a purchase was made ensuring that my idea was going to become a reality.

In the out-of-control spiral that is my mind, the character itself was not enough. Why not a pet? How about a mock play set complete with pseudo-packaging? A personal challenge was on. Little People didn’t have arms. Most of the accessories are buildings or vehicles. I spent a lot of time perusing images of vintage play sets waiting for things to pop out at me. For some reason it didn’t come immediately, but the lion from the circus train was the second idea, it would represent Togare. I searched and found an organ, which was fitting. Next, the red throne from the castle came to mind. Then I was stumped as for a back ground as I was thinking to large. Then it hit me that I could do something interesting with the staircase. To tie it all together a last idea came to me with the blonde women in the red dress. She would remain ambiguous, open to interpretation. Is it Jane? Diane? Blanche? A lot of thought went into this, and the pieces were ordered and assembled.

Off with his head! The parts were separated; the green body was painted black with a white priest collar. The old face was sanded off and replaced with hand painted new features. The lion remained original, as did the throne, organ, and woman as they were already accurate. The staircase was painted black with red accents. One side of the staircase would represent the Ritual chamber. An iSatanist pin was used as the Baphomet plaque. I couldn’t decide if using a sticker was right for the fireplace alter so I ended up constructing one out of stone pieces from a kitchen backsplash purchased at a hardware store.  The other side represented the purple room with secret door. I wallpapered the wall using ornate paper used for scrapbooking. The last touch were the pendants. I originally planed for painted pentagrams so I purchased some silver confetti stars from a party store to use as a template. I ended up just punching a hole through them, adding thread, and now necklaces were added.

The toy set was complete. The next step was to set up poses and take some product shots. Original box designs were digitally dissected and reconstructed to include the toys the way they looked now. A photo for every side of the packaging was created in the style of the original product shot, and finally, an actual box was created digitally. The Vintage Fisher Price Church of Satan was now a reality!

Thanks to the modern technology of the internet I was able to share with others something I otherwise would have done to entertain myself. Feedback has been positive, which is rewarding. At the suggestion of the High Priestess, I also put together a video showcasing this project. Using just the play set, the video setting on my phone, thread and scotch tape for animation, Satan takes a holiday for audio, and Movie Maker for editing, an official commercial nicely tied the whole endeavor together completely.