When the film was finished, randomly selected screenshots were printed out on photographic art paper, and then added to by Sinclair with further strips of cut up texts and images. A full circle form and content in time and space; an estheticized orgasm if you will. These images constitute the exhibition Mementeros, currently on display at MOPIA in Zürich, Switzerland (July 4 to August 28, 2019).

The flesh is an emotion in itself. Our flesh is divided as we move along; dissociated from the humble origins. Blotted out; looking for freedom in friction. This is beyond good and evil, and asexuality is also a sexuality for all we know. Each piece of flesh is a colour, a destiny, an enlargement of the first view – the one we hunt for the rest of our lives; even beyond capacity and function. Sweet life of death – incentive of all incentives. A skeleton and an hourglass transcend all known symbols and all unknown poetry. He knew and was prescient up until the very last moment. In that moment, a very different kind of movement. “Sex and death are my religion.” Grabbing the flesh is not so much dominance as it is submission to the sublime. The desired holds all keys to all kingdoms. Can it for some reason no longer be retained in the emotional sphere? Is that physical sensation so overwhelming? Even so, think of it in colours that rapidly paint an inner room: a psychic chamber only for you and the one you desire. It’s all in the mind; it really is. An illusion so strong it can break down the barriers of that negative kind of subjugation – not to a singular force (which is Eros) but to an entire power structure (which is Thanatos). Sartorial tendencies in the male – a dead give away. Fingers, hands, fists uniting in a poetry of the real. But, dear courtesans of the world, what is actually the “real”? Are your enticing orifices really the only way to the truth? Consult the prophets and find allusions and illusions in equal measure. That can happen between the sexes too, when union is made possible by emotional nudity and a temporary upheaval of the intrusive fireworks of fantasy. Then and only then is progress as fast and clear as the formation of new life (desired or not). Each colour then speaks a new language; utters a new sentiment; conveys a new message of the flesh. “Long live the new flesh!” (but only for a brief moment). We see each other in a flash, a micro-eternity, a diaspora of doubts, and an overflowing ecstasy brings us closer to the unknown pleasures not of the body but of the soul. We cannot go higher, lower or anywhere else then. We are then prisoners of our own souls and there is no moment more precious or divine. Yes, the grabbing fingers leave bruises in the skin tissue. But just as the sun rises, the skin will repair itself to pristine vigour and radiant survival for potential procreation; a feast of the senses more than anything else. Isn’t it better to feel something than to feel nothing? This question sums up all of human philosophy and all our aspirations of life. The soul, the senses, the flesh, the macro-phallus, the micro-phallus – all communicating in a language you yourself constructed because of deep need. Be proud of yourself, your ingenuity and of your power to attract both life and death. Anything could come of this. Anyone could come of this.

Mementeros can be watched HERE:

Lunacy can be watched HERE:

Information about the exhibition at MOPIA can be found HERE:

You can follow the work of Vanessa Sinclair & Carl Abrahamsson HERE: 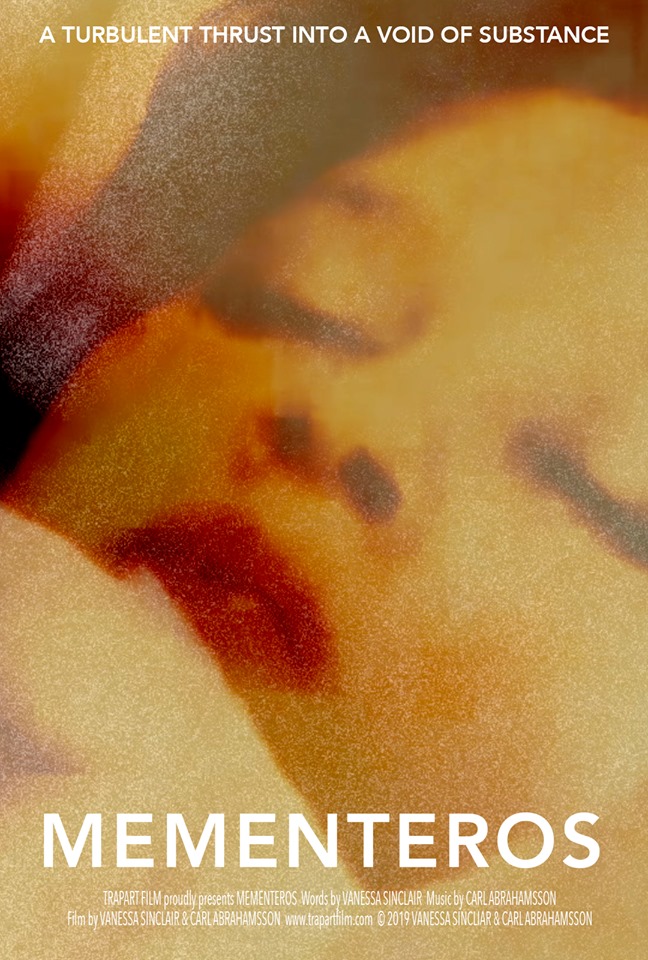