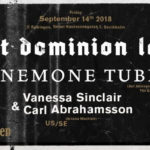 On September 14th, we perform at legendary experimental music scene/club Fylkingen in Stockholm. It will be all new material in terms of music and poetry. We are very happy about this performance, and look forward to seeing/hearing the other acts. We will also bring stuff to sell: cassettes, DVDs, books etc. Come by and say Hi! We hope to see you there!

The Australian unit Last Dominion Lost has existed since 1992, formed out of the ashes of Merge, a project created by Dominik Guerin, founding member of SPK, and Jon Evans. With the inclusion of John Murphy (ex-SPK, Whitehouse, Current 93, Di6 and more), the transition was complete. In April of 1992 the recording sessions for what was to become “The Tyranny of Distance” began and was released 2004 by Tesco.

16 years later, the opportunity arose to reform the slumbering project. With the welcome addition of Ash Wednesday from Crashlands, Einstürzende Neubauten, and Julian Percy from Ratbag the reactivated band began recordings that would ultimately surface on the 2014 album “Towers Of Silence”. “Towers Of Silence” displayed a very contemporary, indicatory approach at the classic industrial sound, followed by the live album “Snowdrops from a Curate’s Garden” and the most recent “Abomination of Desolation” released by The Epicurean.

After the sudden tragic death of core member John Murphy in 2015, veteran industrial musician Till Bruggemann from Gerechtigkeits Liga became the third member, bringing a new palette of sounds to the creative process. The group is currently finalizing their fifth album.

Anemone Tube was founded 1996 in South-Germany but is, since 2010, based in Berlin. The audio works of Anemone Tube are a blend of dark ambient, noise, industrial and sound-art with a strong psychogenic impact and use of constantly shifting and altering sounds.

Working with a random-inclusive cut-up and collage method in texts, films and music, this creative couple invites the audience to be temporarily short-circuited. Cut up poetry, improvised music, jumbled film clips and vocal spells all contribute to a re-enchantment of the petrified forest of contemporary culture. Their performance is an abundant outpouring of orgone, witchcraft and cosmic elasticity. When it’s over it’s over and that’s when it really begins.

Vanessa Sinclair is an American psychoanalyst, artist and poet. Her debut collection of poetry is called Switching Mirrors released by Trapart Books 2016, and that is also the name of her forthcoming album together with Abrahamsson.

Carl Abrahamsson is a Swedish writer who has also been making music and films since the mid 1980s. With the projects White Stains, Cotton Ferox and solo work, Abrahamsson has released more than 20 albums, including amongst others the celebrated At Stockholm (1990) and Wordship (2004) together with Genesis Breyer P-Orridge.

Please help spread this flyer… Thanks!

It’s going to be a wonderful Autumn- and Winter season at Trapart HQ. They have been very productive together with some truly amazing people, and as Summer is waning things are slowly but surely coming to fruition. How about this for starters?

Vanessa Sinclair’s anthology Rendering Unconscious, which weaves together contemporary writings on psychoanalysis with cutting edge poetry in an inspiring and stimulating mix.

Lars Sundestrand’s To Become Who You Are – Funtime with Throbbing Gristle, Monte Cazazza and Psychic TV, an incredible volume filled with Sundestrand’s stunning photos and interviews with Genesis P-Orridge, Cosey Fanni Tutti and Monte Cazazza. Plus an amazing amount of TG and PTV “propaganda” and information. Positively mind-blowing stuff!

And then there’s Ruby Ray’s Kalifornia Kool – Photographs 1976-1982. Ruby Ray was the main photographer in/on the San Francisco punk/post-punk/industrial scenes, and she snapped all the relevant, influential and cool bands and artists. And they all meet again in this exquisite book… Time travel alert!