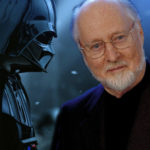 This is a special tribute episode curated by our own Magus Peter H. Gilmore surveying the work of the great composer of film scores, John Williams. Warlock Gene reads program notes written by Magus Gilmore and the selections include tracks from LOST IN SPACE, DRACULA, NIXON, THE FURY and many other films as well as a STAR WARS “suite” covering all seven movies.

This week we feature works by John Williams with performances by The Boston Pops, John Williams, The London Voices, The New London Children’s Choir, and The London Symphony Orchestra.