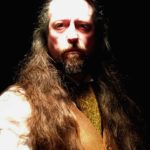 After
recently receiving the prestigious Satanic Warlock of the Year Award, David
Ingram has not been resting on his laurels. In fact, he has attempted to double
his workload. Here is an update on his current and future projects.

Early
2018 sees David treading the boards onstage around Europe (and elsewhere) with
war metal-heads Just Before Dawn. The band is a project between two Swedish
gents, Anders Biazzi and Jonny Petterson, and they invite guest musicians to
perform on their releases. So far, David has written 6 songs for the band and
sang on 5 of them (co-writing one with Petterson.) The 2018 live dates
confirmed so far are:

DOWN AMONG THE DEAD MEN

The third full-length album from Ingram’s Down Among The
Dead Men, titled “…And You Will Obey” will be released in the early part of the
new year. Track listing is as follows:

Troikadon is a triple-fronted band with vocals
from old school veterans Kam Lee (ex-Massacre), Karl Willetts (ex-Bolt Thrower,
Memoriam), and Warlock David Ingram. The lineup is completed by Rogga Johansson
(guitars), Jonny Pettersson (bass) and Travis Ruvo (drums.) Production of the
album, titled “Triumvirate Of Death” is currently underway, and the band are
looking for a label to call home. Tentative song titles are: “Crimson Art”,
“Suffering Of The Sinister” and “Funeral Flesh (A Mortician’s Tale)”

Not many know of the Hellfrost And Fire
project yet, so this is somewhat of a scoop. David joins forces with Rick
DeMusis of GATH (a band David worked with in the studio last year) and his
fellow Echelon member, drummer Travis Ruvo. Their love of the old school bands
Celtic Frost and Hellhammer gave rise to the project, in both the band name and
style. Cover art will be by Canadian artist Propraetor (also responsible for
the second Echelon album cover shown elsewhere.) Here is a tentative sketch of
the as yet un-named Hellfrost And Fire cover:

When you trace the lines of the pentagram, the
letters form the Roman numeral DCLXVI. The number has all kinds of significance
beyond the most popular. To place the final numeral in this configuration, the
most appropriate place for the letter “I” is the centre. There is no more
important pronoun to the Satanist.

The debut album is currently being recorded,
and ought to be released in mid 2018.

Both these bands have begun writing new albums for 2018.
As yet, the third Echelon release is untitled. The second Ursinne full-length
is named “Rise With The Behemoth” and will once again be released on
Transcending Obscurity Records, as a 2-disc release. Disc one will be a
full-length album of original material, while the second disc will consist of
various cover versions and demo tracks from the band’s debut release, “Swim
With The Leviathan.” The line up will consist of Ingram, Jonny Petterson and
Sonia Nusselder.

For more information on the projects listed here, please
visit:

Hail The Church Of Satan!