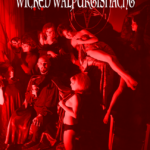 The High Priest and I extend our warmest wishes for Walpurgisnacht to Satanists everywhere, and to the world at large. Tonight we celebrate over five decades of standing against herd conformity and thought, and against the strictures of slave religions that wish to tell their constituents who they should and must be.

It’s been a long, cold winter here in the Northeast where we make our home. Now that the ice and snow have let go their hold on our natural environment, it’s impossible not to notice the annual signs of renewal and how they inspire our own urges toward accomplishing new things and achieving long-held goals. That urge, to get things done as we evolve to the best version of ourselves, is part of what makes us human. How that urge manifests differently in each of us, is what makes us individuals.

As many of you know, one of my ongoing projects is the archiving and cataloging of the Church of Satan’s records. It’s been my privilege to read the words and hear the plans and goals of our earliest members, and how they responded to the message Anton LaVey began sending the world with the creation of his Church. One of the most important elements of this message, was that human beings should never submit their passions or their identity to rules forged by society or religion. Unless your actions harmed another person or animal, your role in life was to be who you truly are.

It’s touching for me to learn the stories of those who found the Church of Satan through this message. Our records from the late Sixties have a pair of applications from two members who joined and were accepted as a gay couple; their fervent wish was to someday be legally married by a Church who would not just “tolerate” but celebrate their love and partnership. Another application tells the story of a pre-surgical transgender Satanist living in the Midwest, and her attempts to normalize her life in the stultifying atmosphere of the time. Yet another prospective member was writing from her dormitory room at the Erickson Educational Foundation, where she had fled from China when the secret of her transgender goals were revealed. These people saw in Satanism, a beacon of not mere acceptance, but of joyous triumph over the shackles of a society that refused to acknowledge who they really were. They understood immediately that it was imperative to take their lives in hand and forge this one existence for their own happiness.

As Satanists, we feel strongly that our first responsibility is to ourselves. But that is a huge responsibility, and it takes the kind of bravery I’ve spoken of here. Have the guts to fulfill your passion, be who you are, and have a Wicked Walpurgisnacht!

Hail the Church of Satan!