The following ritual was performed March 4th, XXXVI A.S., during a photo shoot for an upcoming book about religions of the world. This is an ongoing project by photojournalist Brennan O’Conner; it should take him about three years to complete.

This is a Spring ritual and even a lust ritual of sorts that recognizes life springing forth from Winter’s icy grasp. It is a celebration of that feeling which all beasts experience at this time of year that most would call Spring fever, that primordial instinct which sparks the mating call.

During the ritual the celebrant and his assistant invoke female nymphs to awaken the lusts of Pan from his wintery sleep. We added some real bump and grind stripper music to bridge from the solemnity of the organ music and the ritual formalities into the dance performed by the nymphs. This added that final visual assault and a touch of humour so often lacking in many rituals I have witnessed. After the ritual we had a sumptuous banquet complete with fruit, meat, cheeses, wine and the finest of Ales.

All script written and copyright © 2001 by Magister Michael Rose, with concept and prop contributions by Robert A. Lang and Diana DeMagis

“The cult of personality is dead, let us continue on down the river of life and let the dead wood lodge behind us with the other refuse and wreckage and forgotten failures!”

Robert A. Lang
CHURCH OF SATAN

The Celebrant, his Assistant, two Succubi, Pan, and as many additional participants as is desired to make up the congregation.

Items standard to Satanic Ritual as described in The Satanic Bible. In addition, two upright hexagonal coffins are placed to flank the altar. A feast is prepared and is readied so that all participants may enjoy it as soon as the formal rite is ended.

As the ritual opens the Celebrant stands before the altar. Pan is also crouched before the altar, but hidden in the shadows. The assistant stands to one side beside the gong. The Succubi are standing in closed, upright coffins flanking the altar, thus hidden from the congregation, who should enter after the stage is set.

The music used for this ritual was the Satanis theme by Anton LaVey, Cathedrales by Lous Vierne, The Stripper by David Rose and For Strippers Only and Shivas Regal by Bill Grundy, Morris Levy & Sonny Lester. 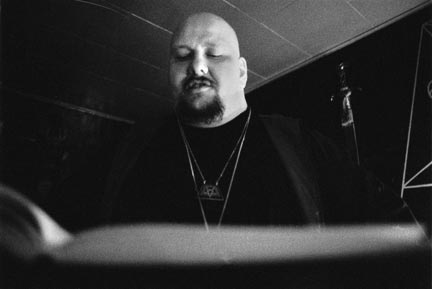 CLEANSING OF THE AIR

In the name of Satan, The Ruler of the Earth, the King of the World, I command the Forces of Darkness to arise from the depths to attend us. Open wide the Gates of Hell and come forth to greet me as your brother and friend.

We who have taken thy name, who acknowledge the beast within, who revel in the delights of the flesh, call upon you! Come forth in answer to your names!

{Each following name is repeated by participants and then the gong is struck.}

INVOCATION OF THE CROWN PRINCES OF HELL

{Celebrant takes up the dagger and calls the four Princes of Hell. After doing this he reads the 2nd key in Enochian.}

{Gong is struck twice. At this point the coffins open. The Celebrant then raises the chalice.} 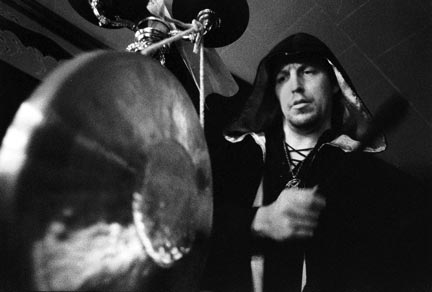 RITE OF THE CHALICE

I raise up this chalice, symbol of voluptuous flesh, to exalt the lusts of the flesh. We drink of the elixir of ecstasy to inflame within us the forces of lust and life.

{Celebrant drinks from the chalice.}

Come and drink, and partake of the fiery lust that is the gift of Satan.

{When all have drunk, some elixir must remain and the Celebrant places the undrained chalice on the altar.} 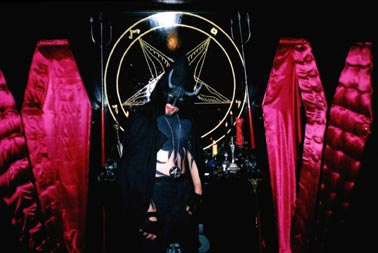 We are here assembled as winter dies to exalt and invoke the forces of lust which renew the earth, and herald the spring. Let others feebly speak of spiritual renewal and mother goddesses. We praise here the Great God Pan!

{At this point the assistant steps forward, and the celebrant withdraws to the back of the chamber. As the assistant makes his recitation, Pan rises from his crouch to stand before the altar.}

Thrill with lissome lust of the light, Come careening out of the night
Pan! Oh Pan!
Come over the sea
From Sicily and from Arcady!
Roaming as Bacchus, with fauns and pards
And nymphs and satyrs for thy guards,
Come with Artemis, silken shod,
And wash thy white thigh, beautiful God,
In the moon of the woods, on the marble mount,
The dimpled dawn of the amber fount!
Dip the purple of passionate prayer
In the crimson shrine, the scarlet snare,
The soul that startles in eyes of blue
To watch thy wantonness weeping through
The tangled grove, the gnarled bole
Of the living tree that is spirit and soul
And body and brain.
Come over the sea,
Devil or god, to me, to me,
Pan, Oh Pan!
Come with trumpets sounding shrill
Over the hill!
Come with drums low muttering
From the spring!
Come with flute and come with pipe!
Thrust the sword through the galling fetter,
All-devourer, all-begetter;
Give me the sign of the Open Eye,
And the token erect of thorny thigh,
And the word of madness and mystery,
Pan, Oh Pan!
Do as thou wilt, as a great god can,
With hoofs of steel you race on the rocks
Through solstice stubborn to equinox
And you rave and you rape and you rip and you rend
Everlasting world without end,
Maiden and man,
In the might of Pan.
Hail Pan, {all repeat}
Hail Pan, {all repeat}
Hail Pan! {all repeat}

The raging lust of Pan shall renew all life after the long grey winter. Let fools and weaklings deny and disparage lust. We know that he who denies lust, denies life! {gong is struck}

CONJURATION OF THE SUCCUBI

Let us be exalted by our lusts! In the names of the great Harlot of Babylon, and of Lilith and of Hecate, our lusts shall be fulfilled. Pan sleeps, but we shall awaken him. His lustfulness wanes, but we shall renew it. 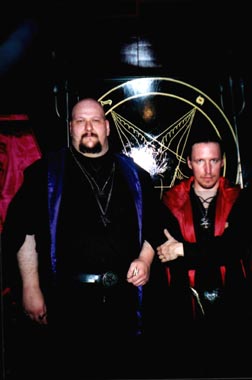 {Celebrant continues with the 13th key in Enochian.}

I call upon the Daughters of Darkness—Infernal creatures of joy, Temptresses, Nymphs, Succubi. They shall awaken his lust.

{Celebrant continues with the 7th key in English.}

The East is a house of harlots singing praises among the flames of the first glory wherein the Dark Lord hath opened His mouth; and they are become as living dwellings in whom the strength of man rejoiceth; and they are appareled with ornaments of brightness, such as work wonders on all creatures. Whose kingdoms and continuance are as the Third and Fourth, strong towers and places of comfort, the seats of pleasure and continuance. O ye servants of pleasure, Move! Appear! Sing praises unto the Earth and be mighty amongst us. For that to this remembrance is given power, and our strength waxeth strong in our comforter. 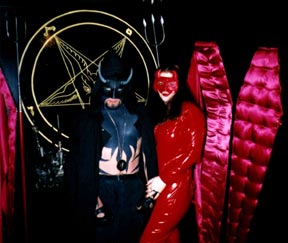 {At the appropriate musical cue [The Stripper], the Succubi emerge from the coffins. Their movements should be earthy and seductive. They drink from the chalice as they dance around Pan, and then they pour some elixir down his throat—he drinks with gusto. After the dancing reaches a sensual climax, one dancer runs “offstage.” As the music approaches its end, she beckons towards one coffin and the other dancer makes a dash for it with Pan in close pursuit. As they enter the coffin and the lid is closed by the other succubus, the gong is struck fortissimo.}

Hail Satan! {repeated by congregants and then gong is struck.}

{Pan pokes his head out of the coffin to leer and flick his tongue then says:}

World without end! Flesh without sin!

{We hear the Succubi giggling with lewd anticipation, as Pan grins again and closes the lid.}

{All participants now enjoy the feast.} 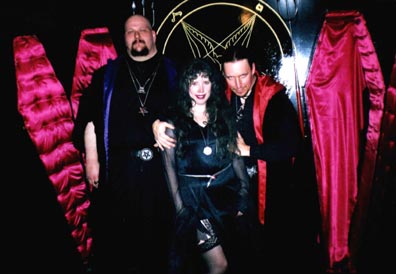 *Adapted by Michael Rose from Hymn to Pan by Aleister Crowley.

Welcome to Canada by Michael Rose

Of Cats and Men by George Sprague

Magister in the Church of Satan