Below you will find the official Church of Satan writings as well as those from Active Members. Most will include links for purchase.

Published in paperback by Avon Books (HarperCollins); available in all major bookstores, in the Occult or New Age sections.

The Satanic Bible & The Satanic Rituals were printed together in one limited edition hardcover volume by Rabid Crow Arts & Graphics to celebrate the Church of Satan's 50th anniversary. This was a limited print run and was completely sold out. Originally priced at $50.00 in US currency, copies now appear on auction sites for upwards of $250. 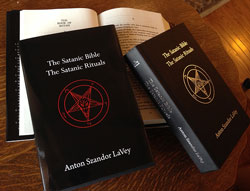 Camion Noir is offering French translations of The Satanic Bible, The Satanic Rituals, The Secret Life of A Satanist, and The Satanic Scriptures.

Dark Rose has again released in Danish translation The Satanic Bible & The Satanic Rituals in one volume.

The Satanic Witch (now including a new forward by High Priestess Nadramia and and a revised afterward by Magistra Blanche Barton), The Devil’s Notebook and Satan Speaks by Anton Szandor LaVey as well as The Secret Life of A Satanist by Blanche Barton are all published by Feral House, and available in all major bookstores.

Blanche Barton’s original version of this book, The Church of Satan, was a slim volume, distilling Satanism’s basic tenets and history to maximize accessibility. This dramatically expanded volume traces the roots of Anton LaVey’s notorious religion to ancient Epicureanism and Middle Eastern traditions, through the medieval alchemists and Romantic poets, flavored by the decadence of the Hellfire Clubs and the courts of Europe, intertwined through the fin de siècle diabolists to reveal how modern Satanists express and explore this thoroughly contemporary philosophy. You will meet healthcare workers, creative artists, VR developers, scientific innovators, teachers, military personnel, and business leaders who have boldly made their “pacts” with Satan, reaping considerable rewards. Through Barton’s intimate knowledge, and extensive interviews with current Satanists, as well as her behind the black curtain access to the present High Priest and Priestess of the Church of Satan, this book provides an unprecedented glimpse into this shadowed, secretive world.

Written from an insider’s perspective, Magistra Barton also reveals how the Church of Satan has grown since LaVey’s death in 1997. With extensive original material from the founding days of LaVey’s Magic Circle, interviews with prominent adherents, scholarly reflections on contemporary Satanism, and a foreword by the current High Priest of the Church of Satan, Magus Peter H. Gilmore, this book is a uniquely intimate perspective on the world’s most notorious religion. Also included are previously unpublished photos and materials from the Church of Satan archives.

The Satanic Scriptures by Peter H. Gilmore was available in hardcover but the English language edition sold-out completely. The paperback English language version is available and can be ordered through Amazon.com by clicking on the cover image below.

The Satanic Warlock is an indispensable handbook for the 21st century Satanic man. Meticulously researched and illustrated, Magister Dr. Johnson shares his decades of experience as a leading member of the Church of Satan and publisher of Old Nick magazine. His real-world knowledge of human sexuality has afforded him deep insights into every aspect of what makes a Warlock.

The Fire From Within
Nemo

The official Bulletin and Tribunal of the
Church of Satan.

The International Forum of the
Church of Satan.

Most of the titles listed here are readily available for purchase. Click on the image of the title to purchase.

Included for the mojority of titles listed, is an ISBN for your reference. This will help you find the exact title from your preferred book retail outlet.

For titles currently unavailable, keep your eye on the official Church of Satan news page for updates!