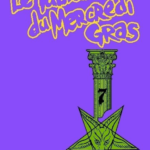 “A Celebration of Stratification!”

A Satanic Ritual by Church of Satan Reverend Daniel Byrd that carries the Mardi Gras season through the season of Lent, while celebrating the differences between the compulsively pious and the responsibly sinful.

I do enjoy Mardi Gras. I love its history and aesthetics. I don’t participate much due to crowds, although I have enjoyed putting on a tux and going out on the town in the past. Mardi Gras is sort of like Halloween in that regular people get to experience a fleeting glimpse at life as Satanists. But Mardi Gras is a couple of weeks worth of sin, ritual and ceremony, where no indulgence is denied.

The tableau during a Mardi Gras Ball is in many ways a literal Satanic Ritual – the ones we’ve witnessed tend to have an acting “Priest” or “Priestess” complete with an “Altar” of some sort; there are deliberate steps and procedures taken, blessings (and curses) proclaimed, and so-forth. It’s elitist; not just anyone can participate. Symbolic gods or other figures may be employed. Amusingly most of the participants are Christians in some style or degree who have no idea what they’re “really” doing.

But of course, these revelers differ from Satanists greatly. Aside from their compulsory nature, the whole thing is really nothing more than a pathetic attempt to get all of their sinning out of their system before they feign sacrifice and “give up” those delightful things that brought them such pleasure for nothing more than the perceived glory of the hypocritical self-righteousness found during the season of Lent.

My favorite tradition here in Mobile, Alabama (the birthplace of modern Mardi Gras) is commonly referred to as “Chasin’ the Devil Round the Stump.” This is a float that leads the last parade of the Mardi Gras season, depicting one figure dressed as a jester and the other a skeleton. Some say it represents Spring chasing Winter away; Happiness chasing Sadness; Comedy chasing Tragedy. The “good” figure chases and beats the “bad” figure with large bladders. The “stump” is a broken column, some say it represents life broken at its climax.

I see all this differently. I like to view the broken column as the broken aspirations of these finite revelers. I prefer to view the figures as Sin being chased by hypocritical sinners; those who chase the very thing that riddles them with guilt. That which they know perfectly well they’re not allowed to enjoy. And though they may enjoy the chase, and even get in a couple of good whacks with their bladders, Sin – the Devil – will always triumph. As for we guilt-free Satanists? Those of us who, to paraphrase Magus LaVey, are the best sinners on our blocks? “Laissez les bons temps rouler!”

So as professional sinners, we Satanists will let them have Fat Tuesday. Let them wallow in compulsory sin and then flounder in obligated guilt. And while they’re smearing dirt on their foreheads and hiding their sins on Ash Wednesday, I propose that we Satanists make “Mercredi Gras” (“Fat Wednesday”) an unofficial Satanic holiday.

The primary motive is not to simply blaspheme against Ash Wednesday, although it does that by its very nature. Instead it signifies a continuance of what we do everyday: sin, indulgence, self-gratification. Those things the herd toy with during the Mardi Gras season but can rarely commit too without losing control and becoming self-destructive, or retreating in remorseful regret. This is about celebrating a guilt-free carnal existence during a time when the difference between them and us takes on more literal significance than usual; an actual calendar day when the chaff sheepishly separates itself from the wheat.

And so, celebrate Wednesday like it’s your birthday. Eat your favorite foods, drink your favorite drinks, enjoy your favorite indulgences. It can be as intimate or as lavish as you’d like. Perform a formal or informal Satanic ceremony in honor of the Self that needs no permission to sin and scoffs at the idea paying penance for it. If you’re able, perform Le Tableau du Mercredi Gras that I describe in my book of the same name. Or if you’re relatively new to using the title of Satanist for yourself, tonight might be a wonderfully symbolic opportunity to solidify and honor that which makes you the Alien Elite. Or heck, maybe even join the Church of Satan if you’ve already been considering it.