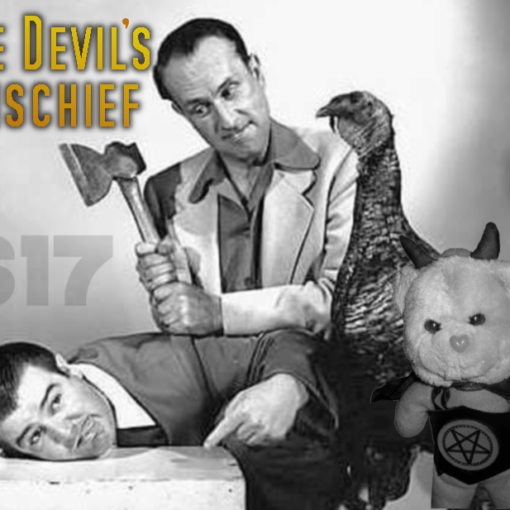 THE DEVIL’S MISCHIEF #617 Massachusetts is not only home to the 617 area code, but to Plymouth as well. So enjoy an old-time radio Thanksgiving celebration with ABBOTT & COSTELLO! Hear Thanksgiving-themed selections from the 1940s “Abbott & Costello Show”, with all of the political incorrectness, sinful swing interludes, cigarette ads, and hilarity from one of history’s most famous comedy duos. Only on Radio Free Satan! Stream Episode #617 Download Episode #617

SATANIC STORY TIME: Episode 37 – “Marionettes, Inc.” with Special Guest Rachael Mantle Now available for Android, Google Play, iTunes Podcasts, Stitcher, www.satanicstorytime.com, and www.radiofreesatan.com:  Satanic Story Time presents episode 37 – “Marionettes, Inc.“, from Dimension X. The Devil’s Tuning Fork: A series of events has led me to the coincidental choosing of these particular tracks. I have selected “Symphony of Destruction” from Megadeth’s fifth album, Countdown to Extinction, which was released on July 6, 1992 through Capitol Records. Also on the track listing for this episode is AC/DC’s “TNT” from their second album, TNT, with the late Bon Scott which was released only in Australia on December 1, […]

Happy 15th anniversary to Radio Free Satan! In celebration of fifteen years of infernal audio, hear ALL of our current shows represented in this extra-long special, with unique contributions from every DJ. Also Magister Bill M. welcomes back Professor Sinister, host of Radio Free Satan’s “Vault of the Lost” program (2000-2007), for an exclusive talk about the station’s early history, its rise through the highs and lows, rare station recordings, and more. Hail Radio Free Satan!