Patrick McCray at the Dark Shadows website The Collinsport Historical Society had this to say about American Horror Story’s depiction of Anton LaVey:

In the most recent episode of American Horror Story, Church of Satan founder, Anton LaVey, is portrayed as one of the villains, literally worshiping the devil, consorting with the fictitious bad guys, and establishing himself as a force of evil in that supernatural universe.

None of this, of course, is accurate or even tangentially related to reality. LaVey was a lot of things, and there is still alleged controversy over the verisimilitude of his official biography, but the man was a solid atheist, and his books clearly posit Satan as a symbolic figure.

Read the full article at collinsporthistoricalsociety.com 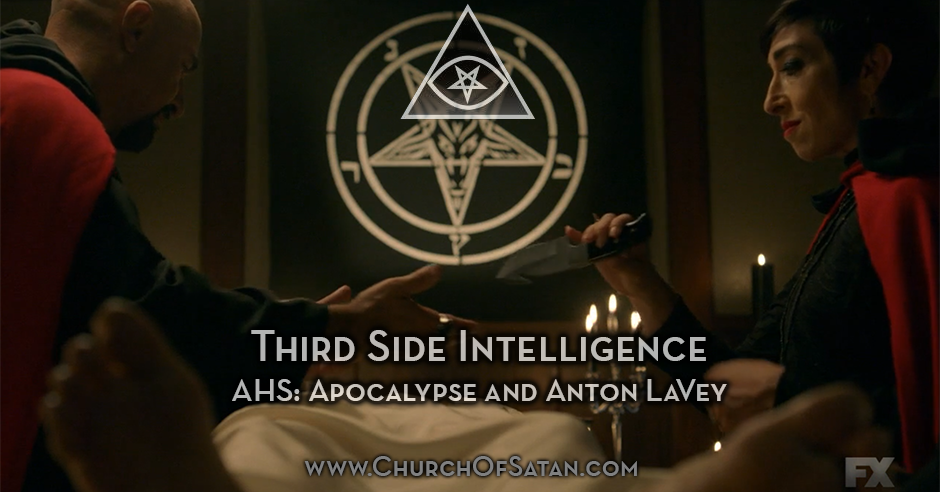 Anton LaVey had recounted to me that he was approached by the producers of the second OMEN film as they wanted to have just a brief shot of young Damien in the ritual chamber of the Black House in San Francisco. They said it would be easy, that they’d bring a cardboard cut-out image of the child actor in costume and all that LaVey would need to do is pose with him in front of the altar, making a gesture of Infernal blessing. LaVey refused both the money and the publicity that would come from this as he did not want to confuse the public with imagery making him seem to accept the Christian mythology of there being an Anti-Christ, and that he would in any way support, bless or otherwise pay homage to such a fictional character or theist religion.

Since Magus LaVey quite adamantly rejected the linking of himself and his organization to Devil worship and both murderous and sacrificial acts, I’m confident that he’d not be pleased with the portrayal of himself and the organization that was his life’s work in this AHS episode. He designed Satanism as an atheist philosophy of individualism, rational self-interest and personal fulfillment and he did not want that confused with Devil-worshipping, reverse Christianity. Our organization’s spokespersons have long been dispelling that misapprehension, particularly during the years of “The Satanic Panic” when talk shows were promoting urban legend and Christian-fostered hysteria as fact.

From High Priestess Peggy Nadramia’s article From the Church of Satan Archives, which quotes Anton LaVey on the depictions of Satanism in literature and the media:

“In 1966 I formed the Church of Satan [and] incorporated [it] under the laws of the State of California in 1971. This was the culmination of a lifelong interest in the metaphysical, the supra-normal, the occult. My past vocations, beginning in my late teens as a circus wild animal trainer and musician, proceeding as police photographer, clinical hypnotist, researcher and investigator of the paranormal, film and literary consultant on the latter, have all been pursuant to my present role. These vocations offered a unique opportunity to experience the unusual and romantic, sobered by day to day reality. The tenets of the Church of Satan reflect this reality.

“Basically, we believe in RATIONAL self-interest, by ritual which glorifies the human spirit and directs the psyche toward constructive end. Prior to 1966 there was no religion which fulfilled the particular needs served by the Church of Satan, there was NO Church of Satan, de facto or actual. Historical references to Satanism have little bearing on contemporary Satanism of the Church of Satan, as they were invented and perpetuated by traditional religionists of the period for self-serving ends.

“I created the name Church of Satan for its appropriateness and admittedly, its dramatic effect. Semantically, Satan is the “opposite, adverse.” We are opposed to what we regard as outdated, oppressive mores. We live for the present instead of the hereafter; we encourage individual expression and fulfillment, providing it does not infringe upon the rights of others.”