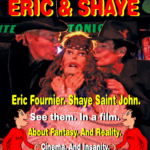 “I feel that Eric Fournier is an unsung hero of our contemporary cinema.”

Filmmaker, video artist and founder of absurdist video art, Eli Elliot has this to say in ERIC AND SHAYE: “If there is a publication, a book or an anthology about underground cinema of the past decade and it doesn’t include Shaye Saint John then it is clueless. Eric had a huge impact and he should be remembered as one of the most unique and important filmmakers in the age of the internet.”

“I highly regard Eric Fournier as a filmmaker and I feel that his legacy should be preserved for future generations to behold. I have a very strong feeling that ERIC AND SHAYE will be the best film I have ever made! It is my promise that ERIC AND SHAYE will shock, surprise and delight as it transcends rational thought. diving deeper and deeper into the inner recesses of the brilliant brain of Eric Fournier telling his story from his point of view, Shaye Saint John’s point of view and through the intimate personal details of his life as told by all of his closest friends, roommates and co-workers who were there from the very beginning to the tragic ending of Eric Fournier’s life.”

ERIC AND SHAYE is a work in progress and the Kickstarter Crowdfunding Campaign will launch on Friday May 27th and will be live until 11:59 PM PST on Thursday, June 30th, 2016. Lots of tasty treats are available here for Kickstarter supporters Including advance copies of the ERIC AND SHAYE DVD.

Here is the trailer:

If you would like to order Larry Wessel’s ERIC & SHAYE DVD or one of the many other rewards, click here for the The ERIC AND SHAYE Kickstarter link.

The FUN has just begun!

—Larry Wessel
Producer, Writer and Director of ERIC AND SHAYE