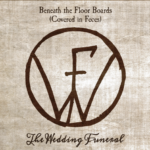 The Wedding Funeral is the brainchild of internationally touring, alternative punk-blues musician Darren Deicide and choral-trained Ethel Lynn Oxide. Beneath the Floor Board (Covered in Feces)was released in 2017 and is The Wedding Funeral’s first 4-song demo, all tracks recorded in single takes with no digital fixes. Until now, it has been exclusively available for listening at theweddingfuneral.com. This fall, the debut LP release from The Wedding Funeral will be released.

For more information, go to http//theweddingfuneral.com.