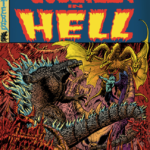 SciFi Japan reports on a new comic series from IDW. The Sabbatic Goat—realized as a muscular superhero—appears to be directing King Ghidorah against Godzilla in an Infernal Daikaiju battle beyond Dante’s vivid imaginings.
Jeff Zornow’s expert EC Comics style variant cover above is a promising teaser, and Godzilla depicter extraordinaire Bob Eggleton will be on board as well.

Looks like it will be loads of fun—we’ll be watching!

From the press release:

In over six decades of battles and triumphs, Godzilla has never faced a challenge as great as what’s coming his way this July, when Godzilla goes to hell! In Godzilla in Hell, a five-issue miniseries launching in July, Godzilla will storm through the gates of hell itself, proving that the towering behemoth is King Of The Monsters both above and below!

With no warning and no sign of salvation, Godzilla is plummeted to the deepest, darkest bowels of the infernal kingdom. The mystery of what led to Godzilla’s damnation, and what it will face, will take readers on a dark and twisted journey unlike any Godzilla story before!

Click on the image above or on this link to read more on SciFi Japan.