JR: First off, I’d like to thank you for taking time aside to conduct this interview, and would like to say that I feel much has been left in the dark about your more exclusive creative projects. Besides art, and music, what are some other pastimes of yours that would qualify as creative, or that you would deem to be a crucial element in art?

PHG: I spend as much time as I am able in writing words—which include philosophical essays, fiction, and screenplays, and also in writing symphonic music. I still create images, but that does not occupy as much of my time as it once did, when I spent a great deal of time in drawing, painting and making films.

Reading inspiring works and watching films of interest keep me stimulated, as does spending time with creative individuals, with animals, and out in nature.
For me, the most crucial element in art is to be “aware,” so that the unique perspective I have may then be crystallized in whatever I produce.

JR: I’ve noticed that you have created a few different renditions of the famous Toho Studios creation, Godzilla. Has Godzilla played a role in the way in which you draw or paint things, or has is been a subject of
preoccupation or hobby?

PHG: Godzilla has long been an inspiration, as I’ve always seen him as a modern embodiment of the ancient sea dragon of mythology, Leviathan, Jormungander, Tiamat, and so on. For me he has been a potent symbol of Nature inexorably seeking justice when mankind has thrown it out of balance through his meddling. I have drawn likenesses of Gojira since I could hold a pencil, and I also enjoy assembling and painting model kits. The “garage kit” explosion has lead to the availability of resin and vinyl kits, sculpted in amazingly accurate detail, which must be assembled and painted with some skill. These make excellent idols! I have been active in Godzilla fandom, contributing art and articles to some of the fanzines. And my website, Godzilla Beyond Toho, explores various takes on the design of the King of the Monsters. It is a hobby, but rooted in the potent symbolism behind this contemporary avatar of Nature’s retribution.

JR: Aside form Godzilla, I have also noticed many of your drawings and other images in small-print magazines such as “Crypt of Cthulhu.” Have you always felt necessary to contribute to these lesser-known publications in the way of comrade or friend, to this slowly growing sub-culture?

I’m always happy to participate when I think I have something to offer that others might find of interest. I have contributed art and fiction to horror genre publications, and our own magazine, Grue, is a long respected and award-winning publication which I’ve often illustrated as well as designed. I have long been an admirer of Lovecraft and his circle, and have very much enjoyed being a small part of the “fandom” that is associated with this sub-genre.

JR: I have heard some of your music featured on various Acheron albums (of Vincent Crowley fame) and on some A&E documentaries. How long have you been an acquaintance of Mr. Crowley?

PHG: About a decade.

JR:What exactly have you contributed to his albums, and what works are you particularly proud of?

PHG: I’ve contributed what I’d call bombastic symphonic introductions, to the Acheron albums. On some there were quite a few, which acted often as interludes. On “Those Who Have Risen,” the final album to which I contributed, I supplied a longer piece that acted as an overture of sorts. Going back and listening to these again, I find that I enjoy that final “Nosferatu Prelude,” which was a version of a longer piece originally written as a tribute to Vlad Tepes. I also think that some of the settings I did of the “Nine Satanic Statements” are exciting.

JR: Are there any instruments aside from keyboards and drums that you are proficient with?

PHG: When you say drums, I need to clarify that to meaning tympani, snare drum, bass drum, cymbals, tam tam, and the usual collection of percussion instruments you’d find in a wind band or orchestra—not a kit drum set as played in a band, which I’ve never played.

I did sing a great deal during my musical studies—my range is baritone. I was once part of a choral ensemble that performed Massenet’s “Herodiade” with Eve Queller and the New York City Opera Orchestra in Carnegie Hall. I have not had opportunity to keep up with that for many years now.

PHG: While at the university we learned to play most instruments on a basic level, and I was particularly fond of the bassoon. But my favorites remain my electronic keyboards with which I can imitate anything in an orchestra as well as a full pipe organ. The endless timbral possibilities always fascinate me.

JR: What are your influences in music particularly? Who has stood out as your number one influence over the years?

PHG: I am influenced by the “classical” composers whose work I love, the favorites being Mahler, Bruckner, Shostakovich, and Beethoven. I’m equally influenced by composers noted for their film scores: Bernard Herrmann, Jerry Goldsmith, and John Williams. Overall, Gustav Mahler is my “number one” source of inspiration. His symphonies are the pinnacle of what is my favorite artform.

JR: Who has been your influences in the way of art?

JR: Has the city of New York had any influence in the way in which you create things, or view art? 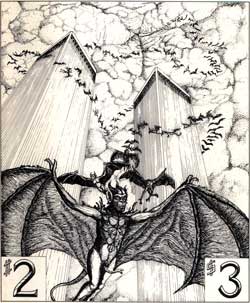 PHG: The museums in this city are filled with the loot of centuries, all available for me to enjoy, so there is much I can view first hand here. I’m also thrilled to experience the amazing architecture of Manhattan. This mad warren of high-rise, structures filled with frenzied humans clearly finds expression in things which I create.

JR: I have seen some of the more electronic pieces you are capable of compiling featured on the Official Church of Satan website, but how do you feel towards electronic art in general? Has it diluted the quality in what people can consider art, or do you think it is a powerful medium in the right (left) hands?

PHG: Any tool for expression gains eloquence when handled by individuals with talent and vision, who have mastered the techniques required by their chosen means. I have long enjoyed making and hearing live music, and putting brush to canvas, but these new digital devices allow for a different and equally sophisticated range of creative endeavors. The down side is that these new expressive avenues also allow the mediocre to spew forth their middling efforts with greater ease. This is why it is now time to herald a new age of discrimination, wherein educated aesthetes seek out and champion truly outstanding creations.

JR: Is there any advice you would like to give younger artists today?

PHG: It would be the age-old advice to open their eyes and learn as much as they can about the world, and our species, so that there will be a rich experience as the fuel for expression in whatever art is selected as the medium. The chosen artform must be mastered with a ruthless self-criticism, geared towards an ever evolving mastery of technique and sophistication of content, so that the greatest of works produced may aspire to stand along side of the masterpieces of past geniuses. It is a tall order, but the muse demands no less.

PHG: We are in an exciting time, as our various media are rapidly providing means for ever more elaborate creations in home studios, so that freedom of expression will not be hampered via lack of access to these complex tools. Professional level music, film, and video may be wrought, completely expressing the unique mindset of the artist without commercial strictures. And with the advent of the Internet, there is a means for distribution of this material without regard for its market share. It is my fondest desire to continue to be able to filter out the dross and find the best of these creations to enrich my life.

Sex and the Devil: Satan Really Wants You

Occult In America: Satan in the Suburbs

This interview as well as the images and files accompanying it are copyrighted and may not be reproduced without permission.