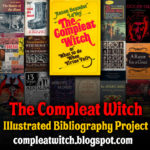 Dr. LaVey stated “Satanism demands study, not worship!” An often overlooked source of secondary materials was provided by him in his magnum opus “The Compleat Witch, or, What to do When Virtue Fails”, subsequently republished as “The Satanic Witch” by Feral House.
At the back of the book is what is titled a “Select Bibliography”, books that influenced his treatise on lesser magic that he wanted to specifically highlight. Ranging in topics from old Coney Island to mentalism, transvestism to color theories, this list of 170 books is a storehouse of Satanic thought.

In the Compleat Witch Illustrated Bibliography Project, a small team of diabolic bibliomaniacs are collecting, for the first time, as much bibliographic detail about each item on that list as possible. Each entry will feature multiple editions, cover and often interior illustrations, quotes and reviews when available.

Rev. Kevin I. Slaughter has slowly been collecting volumes from this bibliography, and has teamed up with Rev. Daniel Byrd, Priestess Kim Rice, and others who have done the same. They encourage you to join in by checking their work against your own collections or research and adding notes in as comments to each entry.

Find the project and follow along as each title is released at http://compleatwitch.blogspot.com/ and the Facebook page https://www.facebook.com/CompleatWitch