This essay was written as an expansion of a “sig” file response we’ve used to answer the large amount of e-mail the Church of Satan continually receives concerning this purported book, the Necronomicon, and its history and validity. Read on and learn the truth about this controversial tome.

The Necronomicon is a fictional “prop,” invented by the American writer Howard Phillips Lovecraft. 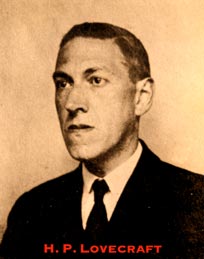 During his brief life (from 1890 to 1937), he produced original short stories (as well as extensive revisions to the tales of other authors), novels, poetry, and essays and is now considered to be one of the most significant authors of supernatural fiction in the twentieth century. He spent most of his life in Providence, Rhode Island, and he chose to set most of his stories there, or in imaginary towns and locales in Massachusetts. His writings were published in pulp magazines and amateur press publications, which meant that his readership was limited. August Derleth and Donald Wandrei started a publishing company called Arkham House, and after his death brought Lovecraft’s work to the attention of a far broader audience beginning with the release of The Outsider and Others in 1939. His writing is considered to be seminal for much succeeding fiction in the genres he explored, and it still exerts a powerful influence on artists and film-makers.

As Douglas Robillard noted in his essay on Lovecraft in The Penguin Ecyclopedia of Horror and the Supernatural, “A feature of Lovecraft’s fiction that sets it off from that of many writers in the genre is his construction, as he wrote, of a background of consistent and elaborate pseudomyth.” Thus, his invention of the ultimate grimoire, the Necronomicon, was an important part of his fictional modus operandi. Lovecraft first referred to the Necronomicon in 1922 in his short story “The Hound,” which was later collected into the volume Dagon & Other Macabre Tales, published by Arkham House in 1965, and he went on to include it in several other stories. A circle of writers who were friends and correspondents with HPL also started mentioning this book in their horror tales, thus making it seem like it really existed. The illusion was well done, as they would mention this fake book amongst the names of actually existing books that dealt with witchcraft and demonology. Inspired by HPL, they too invented diabolical books to add atmosphere to their tales: Clark Ashton Smith—The Book of Eibon, Robert E. Howard—Unaussprechlichen Kulten, Robert Bloch—Cultes des Goules and De Vermis Mysteriis among many others. The practice of this “Lovecraft Circle” of writers to invent “forbidden books” is very well documented. They would even create bogus histories of various editions for each of these books to add to the verisimilitude.

"The name Necronomicon (nekros, corpse; nomos, law; eikon, image = An Image [or Picture] of the Law of the Dead) occurred to me in the course of a dream, although the etymology is perfectly sound.”

However, as suggested by Lovecraft scholar S.T. Joshi—who knows Greek perhaps better than Lovecraft, when this word is seen as an analogy with Manilius’ Astronomicon, a book which was known to HPL, it actually would mean “Concerning the Dead.”

“As for bringing the Necronomicon into objective existence—I wish indeed I had the time and imagination to assist in such a project...but I’m afraid it’s a rather large order—especially since the dreaded volume is supposed to run something like a thousand pages! I have ‘quoted’ from pages as high as 770 or thereabouts. Moreover, one can never produce anything even a tenth as terrible and impressive as one can awesomely hint about. If anyone were to try to write the Necronomicon, it would disappoint all those who have shuddered at cryptic references to it.”

There are historical “Books of the Dead” coming from both Egyptian and Tibetan cultures, and in some manner their existence may have inspired HPL. These books contain incantations essentially designed to aid the disembodied soul on its journey through the Underworld of each mythology for which they were written. In the excerpts Lovecraft wrote in his tales, supposedly coming from the Necronomicon, we mainly find cautionary erudition concerning magical powers and practices stemming from alien entities with godlike powers, who are said to exist in other dimensions, neither alive nor dead, and who will return to earth someday “when the stars are again right.” Thus, the premise of Lovecraft’s book differs from what is found in these real books of the dead, as well as the theory and practice found in existing grimoires, which are manuals explaining how to summon up demonic entities, usually based on Judeo-Christian mythology. His was truly an original conception.

“That is not dead which can eternal lie, And with strange aeons even death may die.”

H. P. Lovecraft—as Abdul Alhazred a couplet from the Necronomicon,
quoted in the tale “The Call of Cthulhu”

Of course, it was inevitable that a number of people would eventually see fit to produce books called Necronomicon to cash in on the gullibility of those who did not get this elaborate inside joke.

Here follow some of the prominent ersatz Necronomicons that you may enounter. 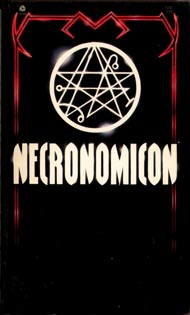 The most widely distributed version is the Necronomicon by Simon. The Magickal Childe, one of New York City’s most famous occult shops, published a deluxe leather-bound copy of this book in 1977, which was later released as a paperback by Avon books in 1980, and so it became a mass market release reaching many thousands of readers.

In my conversations with Herman Slater, the owner of the Magickal Childe, he noted that “Simon” did exist, but hinted that his stated pedigree was about as authentic as that of the Necronomicon invented by Lovecraft. Slater recounted that, over the years, customers to his shop continually asked for copies of this book mentioned in Lovecraft’s tales. So a market clearly existed for a ritual book that somehow might be passed off as authentic—if it were somewhat like that mentioned by HPL. The book thus fabricated by the mysterious Simon is an artful blend of pseudo-Sumerian and Goetic ritual, with names crafted to resemble those of Lovecraft’s invented monster gods. More importantly for many would be Black Magicians who bought copies, it had performable rites and plenty of arcane sigils. It was more than enough to sucker-in the gullible and it still sells well today.

Satanists understand that any prop that is sufficiently stimulating can be used in personal ritual, so if the materials contained in this book send the proper chill down your spine, then certainly avail yourself of them. As Magistra Nadramia has said: “Working with and expressing your emotions in the ritual chamber using this particular little black book is perfectly valid Satanic magic. A careful look at The Satanic Bible will tell you that Dr. LaVey encouraged the magician to use any and all elements of fiction, fact and fancy to create his Intellectual Decompression Chamber.”

Just don’t fool yourself outside the ritual chamber into the belief that you are using some authentic ancient tome handed down by Elder Gods to their human, or humanoid, servitors. 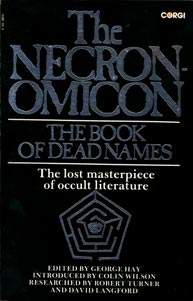 Next is the George Hay Necronomicon. It was originally published in Great Britain by Neville Spearman, Ltd. in 1978, and in paperback by Corgi Books in 1980 (see image at left), and has been more recently reprinted by Skoob Books.

In his essay “The Necronomicon—The Origin of a Spoof” (printed in issue #23 of Crypt of Cthulhu magazine, published back in 1984), Colin Wilson, the writer of the introduction to this volume, clearly states that this book was a fraud wrought by himself with the assistance of several of his associates. It is a fascinating article and it details the genesis of this version, and the steps taken to make it seem plausible. Wilson states, “The fact that he [Gerald Suster—a serious student of magic], found it necessary to denounce such an obvious spoof indicates that we succeeded beyond my original expectations.”

Of course, unless you are an avid fan of Lovecraftiana, it would have been easy to have missed this revelatory essay, as Crypt of Cthulhu is just a fanzine (though one with excellent credentials) with a rather limited circulation. It has not been reprinted in any mass media, nor included in subsequent editions of this book. 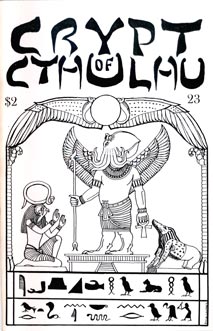 [An aside of interest: the art on the cover of that issue of Crypt of Cthulhu was called “Stele of Cthulhu” and was drawn by myself, long before I became the High Priest of the Church of Satan.]

Swiss surrealist painter H. R. Giger was inspired by Lovecraft’s fiction to invoke realizations of some of his eldritch themes in Giger’s unique biomechanical style. Eventually, the first major published compendium of his images, most rendered via airbrush, was entitled H. R. Giger’s Necronomicon. It was published in 1977 by Sphinx Verlag of Switzerland. The current version now sports an introduction by popular horror and fantasy author Clive Barker and is printed by Morpheus International. This book was given to director Ridley Scott during the pre-production of Alien, and the images therein seduced Scott into hiring Giger to design the titular character. The rest has been movie history, as Giger’s imagery has spawned many imitators in almost a new biomechanical sub-genre of science fiction cinema. A later collection of his images would naturally follow as H. R. Giger’s Necronomicon 2, printed in 1985 by Edition C of Switzerland. The currently available edition is also printed by Morpheus International. 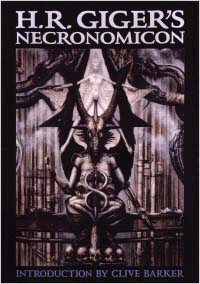 In time, it would not surprise us if other forged Necronomicons will come into being. If any of them are signficant, we’ll include them on this page.

So, to the seeker after the Necronomicon, the facts confirm that Lovecraft was truthful—he invented the idea of this book as a prop for his superlative tales of the macabre, and it remains such a potent image that people are unwilling to accept that it was just his fictional invention. He was quite a literary sorcerer, that Old Gent from Providence.

State of the Church XXXVI A.S.