Essays by Dora Marsden (1882 – 1960) from her journal The Egoist. Introduction, annotations, glossary and index by Trevor Blake, author of Dora Marsden Bibliography. 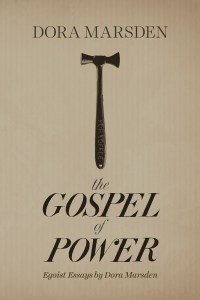 What a blight it is on life, to be sure, that honest speech is almost non-existent. Lo and behold, all are alike: the secret sin against the spirit of peace is universal, and can be proclaimed from the housetops.
The “poor” man is the one who lacks the power to get what he wants. If he had had the “might,” the “competence” to cover the wide expanse of these “rights,” he would not be in the position of a beggar asking for the favour of a job from a master: he would have set about being his own master: the one thing which to this day the ordinary wage earner steadily refuses to be. “Reformers” have tried to get a comprehensive view of the “world’s work”—which does not exist save in their own imagination—and they have come to neglect and hold lightly work viewed from its only real aspect—the personal satisfying of needs and wants as they rise up spontaneously from each varying individual. Social rebels will get no way until they acquiesce willingly in men and women being what they are: accept their oddities and wayward differences and then make the best and most of them to serve their individual ends.