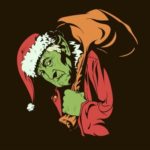 Satanic Story Time Presents Episode 31 – “How the Grinch Stole Christmas” by Dr. Seuss and starring Boris Karloff as the Grinch

The Devil’s Tuning Fork: King
Diamond’s “No Presents for Christmas” from his 1985
single, No Presents for Christmas. This single served as the first
music released from King Diamond after his breakup with Mercyful
Fate. It also featured “Charon” on the B-Side. Also featured are the
following three songs from the H.P. Lovecraft Historical Society Choir (HPLHS).
The songs are “Blue Solstice”, “Oh Cthulhu”, and “Go Summon Up the Dead Ones”. “Oh Cthulhu” is
featured on A Very Scary Solstice which was released
in 2003. “Go Summon Up the Dead Ones” and “Blue Solstice” are featured on An Even Scarier Solstice, which was released
in 2006.

The Devil’s Workshop: Dr. Seuss’
short story, “How the Grinch Stole Christmas” starring Boris Karloff as the
Grinch was first televised on December 18, 1966.

The Devil is in the Details: I summarize Dr.
Seuss’, “How the Grinch Stole Christmas” and touch on some principles that can
be taken away from his story.

Satanic Story Time Announcements: The Satanic Players Society Samhain 2015
Special, “The Book of Ixin”, is now available for
purchase at CDBaby, Google Play, Amazon, and iTunes. Episode 31 contains a
special promo for “The Book of Ixin” written by Citizen
Horror.