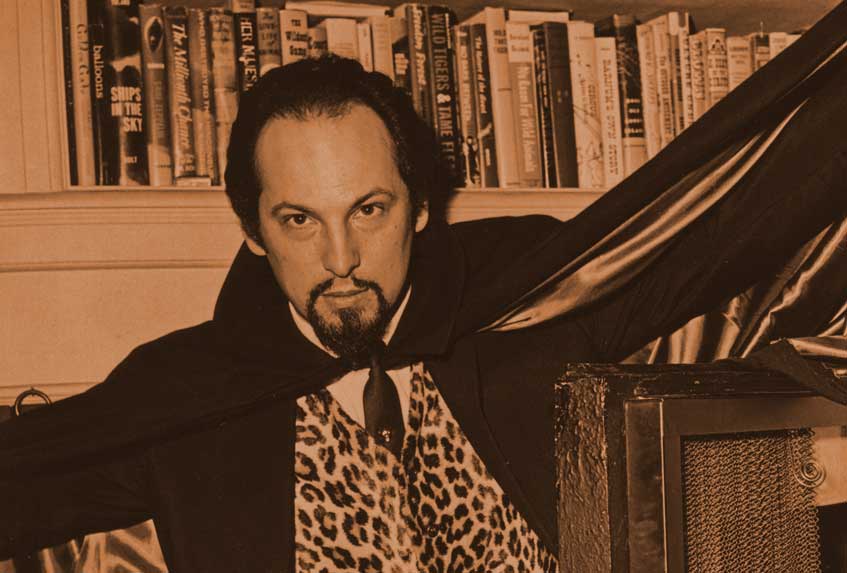 In Satanism, it is understood that we each perceive the universe around us to the best of our abilities. We evaluate it and have our own subjective perspective on the vastness of the cosmos and the mechanisms that move it. We also examine the societies wrought by the humans who populate our globe and how we might decide to interact in these social constructs. This informed choice is our duty, lest we wind up herded into prevailing paradigms.

...we feel free to cultivate our own personas and identities, taking from what inspires us, as well as applying some inventiveness, towards our ongoing self-celebration."

We Satanists value ourselves primarily, hence our perspective is one which places ourselves at the center of our myriad subjective universes, and we feel free to cultivate our own personas and identities, taking from what inspires us, as well as applying some inventiveness, towards our ongoing self-celebration. We are our own gods—we create who we are. Naturally, Satanists might not find what others have decided to craft for themselves to be to their tastes, but, as Satanists, we defend that process in our fellows. We aren’t disconcerted if other Satanists look upon us and find what we’ve done to be not particularly worthy of their contemplation, or decide that they have no desire to engage us. Such is the proper poised detachment for the self-deified. The Church of Satan doesn’t require personal or virtual congress amongst our members, nor do we require that all endorse one another. That our philosophy is one of radical individualism means that we Satanists embrace a de facto diversity.

Anton Szandor LaVey was quite unique for a man born in 1930. As he grew up, he experienced a panoply of differing individuals, and he took up with many creative, artistic and unusual folks—from carnival performers and those unique individuals working in “freak shows” to proud sexual fetishists, misanthropes and what we now call people from the LGBTQ+ spectrum. He judged these people by how well they fulfilled their interests, desires and passions—approving of those who achieved success in being their own self-made beings, despite any approbation or denigration by the common herd in which they were embedded. These people could be exciting, fascinating, and even exasperating—but they weren’t the dull batch of sheep-like believers who are the typical majority in any conglomeration of humans.

LaVey himself cultivated a rather flamboyant appearance, sporting at times a cape, pith helmet, leopard-patterned vest, jodhpurs, and even red or purple shirts. Such affectations satisfied him and were part of his multiple “show biz” personas. Once he founded the Church of Satan, some journalists looked at his mode of dress, and his shaved head and artfully-pointed beard, and decided he must be effeminate, implying he might be homosexual. Doktor took that in stride—he had plenty of gay friends and, while he wasn’t gay himself, he really didn’t care what others might think, and didn’t find it a horrendous insult. He was quite self-assured in his masculinity, despite going against then standard modes for the sartorial expression of it.

When crafting a religion that he felt would be a healthy antidote to the repressive theisms he experienced around him, the idea that self-satisfaction, particularly sexual fulfillment—so long as it was between consenting adults, was a primary course in the foundation stones of Satanism. Before LGBTQ+ individuals had been deemed, by the then dominant “science,” to no longer be suffering from some form of aberrant behavior requiring either suppression or a “cure,” his Church of Satan would welcome those oftentimes smeared with the slander of deviancy—the outsiders and pariahs. Satan in mythology and literature was often portrayed as a proponent of the forbidden, the taboo, the clandestine, so he felt that this was the rational and only truly Satanic perspective that must be part of his fledgling organization’s philosophy. “Deviancy” to Anton LaVey was a virtue, not a defamation. And so the Church of Satan as a point of policy has always joyously included the deviants and outsiders on their own terms—the “alien” part of “the alien elite.”

...the Church of Satan as a point of policy has always joyously included the deviants and outsiders on their own terms—the “alien” part of “the alien elite.”

We of the Church of Satan were thus far ahead of most other religions in this point of view. Now, over 50 years later, the rest of progressive society has been playing catch-up. Just this past May, the World Health Assembly voted to change the World Health Organization’s diagnostic guidelines to no longer describe gender nonconformity as a mental disorder. We proudly point to our own past—and this is not “virtue signaling”—as it is a reminder to the world of what has always been fundamental to our principles. If some shades of the current spectrum of belief are now congruent with our long-held stances, then observers should be encouraged to note that we Satanists pioneered such thinking. Satanism is not a knee-jerk opposition to whatever might be trending around us. When many began wearing black more regularly, that didn’t cause most Satanists to begin avoiding that color, if it was a hue they preferred wearing. Satanists aren’t just contrarians to what the greater part of society might be doing—if people are moving in a direction that is congruent with our principles, that is something to enjoy, not oppose.

Since the Church of Satan has proven itself as long having been a haven for wildly divergent sorts of individuals, it is incumbent on those who join us to understand that they are amongst many who will be not like themselves, beyond the agreement that Satanism is their self-defining philosophy. Therefore, the desire to, in any way, limit our membership to only those who might share one’s own fetishes—be they sociological, political, intellectual, or sexual—is unacceptable. Anyone who might be musing upon the premise that the Church of Satan is infested by, or otherwise besmirched, or in need of “purification” of whatever they find not to their tastes would be committing a grotesque hypocrisy, subverting the rational coherence of Satanism itself. My essay, Rebels Without Cause, which covers the psychology of the baseless renegade, employs a quotation from our founder establishing the fundamental premises for his philosophy and organization:

“Satanism is the only religion which serves to encourage and enhance one’s individual preferences, so long as there is admission of those needs. Thus, one’s personal and indelible religion (the picture) is integrated into a perfect frame. It’s a celebration of individuality without hypocrisy, of solidarity without mindlessness, of objective subjectivity. There need be no deviation from these principles. They should summarily negate internecine strife and bickering. Any attempts at Satanic ‘reformation’ should be seen for what they are: creating problems where none exist. There should be no place in any religion for reformers whose very religion is the fetish of reformation. There is even a place and title for compulsive dissidents, and if they can wear the mantle, they are welcome. They would delude themselves to be revolutionaries. In our camp, they are called ‘House Masochists’.”
—Anton Szandor LaVey

If some shades of the current spectrum of belief are now congruent with our long-held stances, then observers should be encouraged to note that we Satanists pioneered such thinking."

I strongly agree with Doktor LaVey on these principles. While members of the Church of Satan may readily decide which fellow members are truly like-minded and like-intentioned, and limit their intercourse to whomever they carefully select, none are forced to support the specific ends other Satanists have chosen on their journey to fulfillment. You might find each other’s ends to be either delightful, dull, or repugnant—that is your prerogative. But your opinions regarding your fellows’ application of Satanism to their unique lives are neither being solicited, nor should they be offered unrequested. We who uphold the tradition established by Anton Szandor LaVey expect all members to champion their colleagues’ privilege to make of themselves what they will. If you can’t share our esprit de corps infernal that advocates self-realization in myriad manners, then you are cordially invited to depart the Church of Satan. Any who might deem themselves “crusaders” for some sort of bigoted, repressive, condescending, or limiting position are proceeding from a Christian perspective—and that has never been welcomed in this, The Devil’s Fane.