As click-bait virtue signaling, the term “cultural appropriation” has been around for years. The parameters can vary, and the frantic pedantics push the needle one way while the more reasonable among us roll our eyes and just push it back. What it boils down to lately, is “I know it when I see it.” And now I see it for Satanism.

When he founded the Church of Satan in 1966, Anton LaVey’s press coverage minted an iconography that didn’t exist before."

I always give the stink-eye to any person or group that wants to rain on another’s parade; they tend to be motivated by a petty resentment for anyone having a good time. So there’s very little I’ll accept as cultural appropriation, as opposed to assimilation or just appreciation. For one thing, I’m a huge fan of Polynesian Pop, most often referred to as Tiki. I don’t know what could be a better target for the Appropriation Police; I have a roomful of sculpture, drinkware, posters, plaques and assorted tchotchkes depicting what are essentially several other cultures’ religious icons. In my defense, I do treat these objects with a good deal of reverence; they’re my “household gods,” presented as such, cared for, loved. Americans conflated this exotic imagery into an entirely new and positive culture we call Tiki. We insist it is both assimilation and appreciation; others will continue to condemn it as appropriation.

But there are always things to learn, and cultural appropriation is not a concept I dismiss completely. I heard recently that more and more yoga teachers have been made aware of the proper use of the Sanskrit word, “namaste,” and have stopped saying it at the end of their classes. That’s big. When I first read about this, I was skeptical as usual, but I listened to their reasons, and I understand the change. Namaste is a formal greeting, one you say when you meet another person, not when you say goodbye. Its root meaning is, “I bow to you,” or “I acknowledge your right to be here as another human being.” It’s probably not something you should be printing on a tee shirt with a cartoon Buddha and the further encouragement to “Namaste, Y’all!” “Namastaying in Bed!” “NamaSLAY, Bitches!” I get it: Western commercial efforts are not only appropriating a holy word, but they’re using it wrong. Probably not cool; kinda disrespectful.

So yes, I know it when I see it. And in the past few years, a growing number of entities have been appropriating Satanism.

When he founded the Church of Satan in 1966, Anton LaVey’s press coverage minted an iconography that didn’t exist before. He picked an obscure graphic from a book about cross cultural occultism and named it the Sigil of Baphomet, and put it over his altar, on medallions, and on the cover of his never-yet-out-of-print The Satanic Bible. The hearty “Hail Satan!” that punctuated his rituals was a new exclamation, and it quickly ended up being lifted by Ira Levin for his in-process novel, Rosemary’s Baby. The positive philosophy he called Satanism was not like the nihilistic, self-subjugating devil worship of the prior fictional and filmed “satanists.” Instead, he gave us a view that made Lucifer’s pride a reflection of our own, an extension of each Satanist.

[They] are benefitting from a veneer of spooky devil associations, appropriated from our iconography and philosophy, without which they would have received only a tiny fraction of the attention they’ve garnered."

It started with a commercial marketplace just looking for something the kids would buy. Something kind of scary, and a little witchy. We Satanists even have a name for this customer base — we call them Hot Topic Satanists. The tradesmen started slapping our Baphomet symbol on merchandise their eager buyers could layer into their style, along with peace signs, Om symbols, reversed crosses, etc. They throw out buzzwords which are immediately depleted of any power; “cults” and “crafts” abound where there is no intention beyond making a buck on items that are “crafted” in a factory. These peddlers don’t care about the principles behind our Baphomet, but they’ll express “sincere respect” as they simultaneously exploit it while offering nothing in return. Diluted phrases taken from our literature now appear on mass-marketed t-shirts, bought by some who want to seem edgy, but not go too far. The purveyors behave as if Satanism is just something that was always there, which they can tap, without acknowledging the man who founded it and the organization which continues to represent it.

Musical groups have made a similar grab for attention by incorporating Satanic symbols and phrases into their stage presence. A Gothic cathedral set, a creepy Pope getup, “Hail Satan!” and horns up, paired with pretentious interview statements where they claim to be “recontextualizing” terms like Devil, Satan and Witch as if the Church of Satan hasn’t already been doing that for 50 years. But don’t ask them to acknowledge Anton LaVey or admit where they got their act. Then you become a “gatekeeper,” and they accuse you of trying to define who is a Satanist. Damn skippy we’ve defined it, and have been at it long before the latest band went looking around for a gimmick.

...they accuse [the Church of Satan and Satanists] of trying to define who is a Satanist. Damn skippy we’ve defined it, [over 50 years ago!]"

Worst of all, recently political activist groups have started using the symbols, phrases and structure of the Church of Satan to further a particular social agenda; by attempting to compel their followers to take specific action, they’re completely misrepresenting the Satanic principle we hold dearest: individual expression, independence from herd mentality. We would never require our members to agitate, vote, protest, strike — our only “requirement” is that they think for themselves! By trying to assume the role of modern-day torchbearer for Satanism, this group is committing the very “sin” of which they’re so happy to accuse others, that of disrespecting and appropriating a religion and philosophy that they clearly DO NOT SHARE, for the sake of the sexy clickbait it provides. They want the attention our symbols and aesthetics can bring, but they consciously twist our individualist philosophy into a collectivist, herd culture. This is an intentional slur on our religion, and worse than the sloppy but well-intentioned misuse of “Namaste.”

All of the above are benefitting from a veneer of spooky devil associations, appropriated from our iconography and philosophy, without which they would have received only a tiny fraction of the attention they’ve garnered.

We shouldn’t let them characterize our freewheeling, tongue-in-cheek approach to our deeply-held principles as an expression of insincerity — that’s THEIR transgression. We haven’t changed our tune to suit a marketplace, and we certainly aren’t going to let these latecomers dictate the terms. 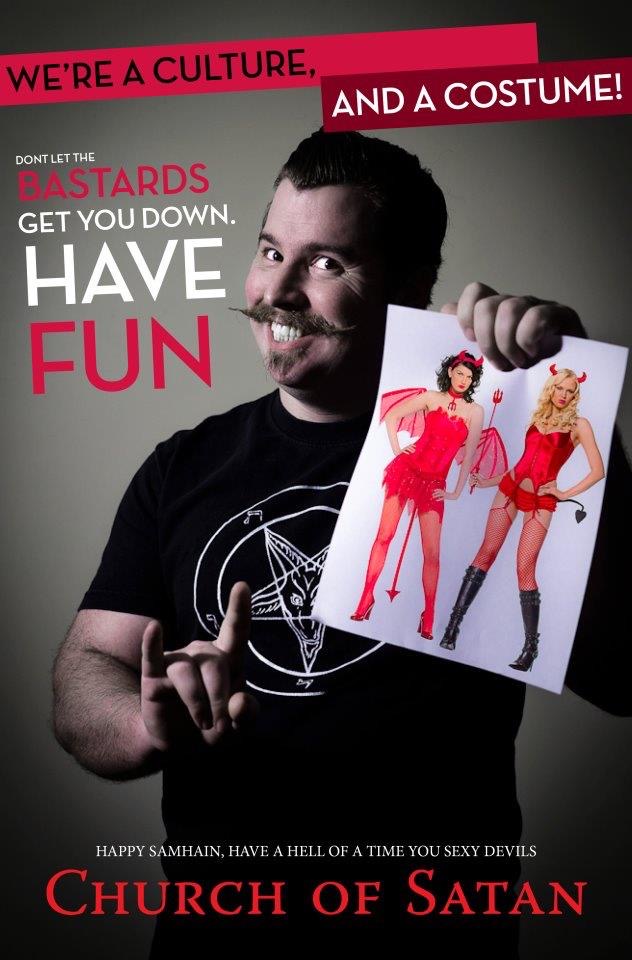 So It Was Written: The History of The Satanic Bible by Anton Szandor LaVey

The Satanic Mass — A Shot Heard Round the World

The History of the Origin of the Sigil of Baphomet

High Priestess of the Church of Satan