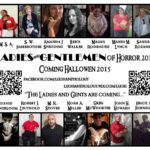 The Ladies and Gentlemen Of Horror

Warlock Alder Strauss, Warlock Robert Leuthold, and Citizen Matt Stover are all appearing  in the 2015 edition of “The Ladies and Gentlemen Of Horror” anthology, created and published by Jennifer L. Miller.

Below is a little tease of what each of them contributed

Warlock Strauss contributed a tale entitled “Beneath The Waning Moon”

After concealing the evidence of their ‘date gone wrong’, four friends find themselves stalked by an unimaginable horror that’s as relentless as it is elusive. In an eerie, isolated rural town, they must now try to not only cover their tracks to preserve their freedom, but work together to prolong their lives.

Citizen Stover’s contributions are as follows:

Hungry – A blast in the mines of San Pedro awaken Hob, a shape-shifting monster who wakes up with a huge appetite and begins to dine on the citizens of the town. His actions get the attention of Hell and they send out their Assassin—Jacoby Ash—to deal with Hob once and for all.

Knocking – Kevin thought he saw something move one night, and he and his wife become plagued by a monster who wants him to let him in for lunch.

St. Lucifer – A man, desperate to see his dead wife once again, utilizes an ancient book of spells to raise her from the dead.

Boggart – Jacoby Ash is sent out to put an end to Hob’s menace. Follow Jacoby as he hunts and fights the shape-shifting monster before he devours the children of San Pedro.

Sanguinivore – The Ancient Draugr Krieg awakens in the suburban town of Three Waters where he promptly begins to enslave and devour the population. His actions gain the attention of Hell and they send out Jacoby Ash to deal with him. Continued in Draugr which can be heard on www.satanicstorytime.com.

All money from purchases is donated to the American Cancer Society