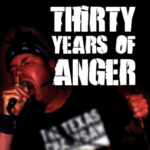 Thirty Years of Anger is an uncompromising story of
one man’s journey through the Australian
underground hardcore punk and extreme metal
scenes and how he discovered The Satanic Bible which led to his involvement in the Church of Satan. It begins in 80’s Brisbane in the oppressive
police state of Joh Bjelke Petersen where anyone who
looks slightly different is hassled to no end and at
times detained without reason by the cops. The
Treasury Hotel was the focal point of activity where
bands played every Friday and Saturday night and
battle lines were drawn between Nazi skinheads and
the notorious Sick Boys.

‘Marky Hardcore’ as he came to be known fronts his
own band Anger In Motion establishing a network up
and down the east coast of Australia with bands such
as Toe To Toe and Warpspasm. This is a no holds
barred story of someone who has experienced this
lifestyle first hand. In a pre-internet era where kids put
on their own shows and set up their own
communication in the form of fanzines.

Often gritty and at times brutal this is a book that tells
it how it was from someone who’s lived it.

$29.95 AU plus shipping from Boolarong Press.

Marquis was the front man for Brisbane hardcore
punk band, Anger in Motion. He has managed bands,
and organised tours and clubs events across the punk,
thrash, grind and metal genres since the 1990s. A
keen writer Marquis’s other passions include comics,
horror movies and travel.