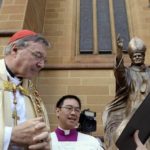 Breaking News: Cardinal and Aide to Pope Is Charged With Sexual Assault

Cardinal George Pell, two steps removed from the Pope, was officially charged with sexual assault by police in the Australian state of Victoria. Pope Francis had refused to remove Cardinal Pell from a nine-member advisory council group after the cardinal came under scrutiny.

We have consistently called out the child abuse epidemic in the Catholic Church and will post updates as this case develops.