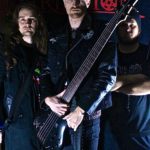 Founder of Children Of Perdition and Church of Satan member, David Sinclair-Smith, appeared on the Australian Heavy Metal radio program “Aftershock” on Wednesday the 29th of June 2016.

Host DJ Styx played select tracks off the Children Of Perdition debut album on the show and interviewed David in between songs to discuss the music, his history in the Australian Metal scene and personal insight into Satanism and the Church of Satan.

The recording of the entire 2 hour show can be heard here.