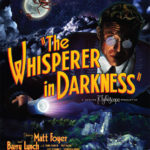 HPL’s vividly shuddersome tale has here aroused a passionate response in all who worked to bring this thriller to the screen. The Old Gent’s macabre vision is rendered with great care, appropriately given an action-packed “third act” denouement which fulfills the ghastly premises of the classic story.

Every aspect of this production is exquisite. Matt Foyer and Barry Lynch inhabit their characters with consummate skill. The supporting cast also delivers the goods, with a stand-out portrayal of Charles Fort by Andrew Leman. Sean Branney’s directing deftly evokes the requisite brooding atmosphere, supported adroitly by a symphonic score wrought by Troy Sterling Nies. The sets, costumes, props and overall production design are detailed, conjuring the essence of that golden age of horror movies. Even the credits, with precisely chosen typography, properly flavor the proceedings. David Robertson’s splendid cinematography is extraordinary – he has quite an eye and the masterly technique to capture iconic images that could serve as stills to illustrate the source story, but are even more magical as living cinematographic art.

There is an additional DVD with plenty of extra features which let you in on the five year process behind the creation of the film. Feast on the feature film, then delve into the craft of the fine folks who brought this into being. You will enjoy seeing how it was done, and marvel at the commitment of all involved. Branney and Leman are wizards inspiring a team of talented individuals who, with both love and talent in abundance, have collaborated to bring the aficionado of H. P. Lovecraft an embodiment of his chilling aesthetic that Hollywood would be hard-pressed to match with their multi-million dollar budgets. “Bravi!"

Click here or on the image above to get your DVD copy (a Blu-Ray version should be ready soon) and begin your journey into the darkness.