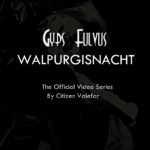 In honor of Walpurgisnacht and serving as a reminder that humans are the most vicious animals of all, Citizen Valefar demonstrates his masterful, impeccable artistic and visual talents with his video creations set to all four parts of the Walpurgisnacht opus; a harsh, dissonant instrumental opus of Dark Ambient, Electronica, and Industrial music created by Gyps Fulvus.

Created and released last year, each video of the movement ties in the theme of various conflicts between the human animal vs. nature, demonstrating that no matter how far humans can advance through means of intellect, technology, and brute force, nature will find a way to triumph over any civilization in its most brutal fashion possible.

Watch the video series in its entirety below:

Walpurgisnacht is featured on Gyps Fulvus’s 2012 album, Invocations, which is available for purchase worldwide on physical CD at Bandcamp, CDBaby, and Amazon, and on digital streaming and download via services such asiTunes, Google Play, and Spotify.

Visit the Official Website for more on Gyps Fulvus, including additional music, recordings, videos, and news.