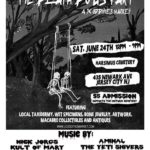 Jersey City, NJ – Saturday, June 24th, the Historic Jersey City and Harsimus Cemetery hosts the JC Oddities Market, including 20+ oddity vendors and an all-day line up of music. A full list of vendors can be found at the Facebook event page. Musicians include Darren Deicide, Nick Jorgs, Kult of Mary, Psychodynamic, Din, AMINAL, The Yeti Shivers, PAULUS HooK, Dread, and Molten. Tours of the underground crypt will be available as well as a petting zoo of the goat herd that pays its annual visit to feed and landscape the cemetery. The cemetery opens its gates at 12pm and admission is $5. All proceeds go towards the volunteer mission to preserve the cemetery. The Historic Jersey City and Harsimus Cemetery is locarted at 435 Newark Ave., Jersey City, NJ.

The Historic Jersey City and Harsimus Cemetery was established in 1829 by the first cemetery company founded in the State of New Jersey and is the size of 6 acres. The cemetery is an early example of Garden Style landscape cemeteries. The location of the cemetery was used as an ammunition bunker for the War of 1812 and was a site of skirmishes in 1780 during the Revolutionary War. The cemetery fell into disrepair and was abandoned in 2008. Since then, a Board of Trustees was founded to maintain the cemetery. Benefit concerts have since been organized when Darren Deicide in collaboration with the Board of Trustees organized its first concert in 2010. The Historic Jersey City and Harsimus Cemetery was also the site of Darren Deicide’s “Back from the Dead: The Harsimus Sessions.”