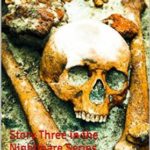 The Werewolf and the Revenant are Dead, and Azazel has instructed Jacoby Ash to head to the town of Oregon, AZ, to exterminate the Vampire Rasmuten. Join Jacoby as he fights this Undead Nightmare and further reveals the machinations of other Powers. Story # 3 of the Nightmare Series as featured in the magazine The Nightmare Engine (Issues #6 and #7) which can be found on Lulu.com under the Nightmare Engine by Michael K. Silva. Temporarily available in Digital format.