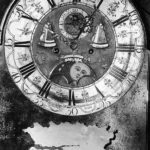 Now available in iTunes Podcasts, Stitcher, www.satanicstorytime.com, and at www.radiofreesatan.com:

The Devil’s Tuning Fork: I play a track by Ghost from their album, Infestissumam entitled, “The Monstrance Clock”. The Devil’s Workshop: We join our protagonist, Sebastian Packer, expert clock maker with a blood-tainted history. The mysterious “Judas Clock” has caused him tragedy and misfortune ever since it washed up on the shore and arrived in his father’s clock making shop in London almost 30 years ago. From the time he first laid his eyes on it, his father told him, “It’s an evil clock son, evil as Satan himself!” His father was crushed under the heavy weight of the clock and Sebastian has been on a thirty year hunt to thwart its curse and to find the man who was behind the murder that correlated with its mysterious appearance and disappearance. A woman asks him to repair a black, marble clock that is estimated to weigh more than 500 pounds, saying it depicts a religious scene with a man hanging from a tree. Could this be the accursed “Judas Clock”? If it is, can Sebastian end the curse that has lasted over several centuries? The Devil Is In the Details: We dive headlong into the story, “The Judas Clock”, written by Christopher Mayo for The Inner Sanctum Mystery and comb over the grim details surrounding the this tale of terror. Mail Bats: I read fan mail from two of our listeners and answer questions as they come in.

The Compleat Story of The Compleat Witch by Magistra Peggy Nadramia, High Priestess of the Church of Satan