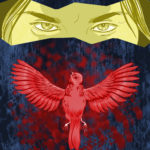 This was originally published in the April 2015 edition of Infernal Ink Magazine and Witch Hydra M. Star even offered to do an Afterword to my story which is included in this ebook version. In the story, an interview with a young, deranged, and dangerous woman could hold the key to the gruesome events on that October night. Was it some deep sexual obsession or something supernatural that led to the unspeakable? This tale has strong sexual and violent content. Not to be read by readers under the age of 18.

From the afterword: “A few pages into the story, I thought “Patient #151” was going to be just another in a long line of stories I’ve been unfortunate enough to read that feature Satanists or devil worshipers (no, the two aren’t the same) that worship the ‘dark lord’ by killing small animals and murdering people. Often these stories have a supernatural twist; the devil is real, he grants his followers’ wishes, or turns on them. It’s a horror genre cliché that unfortunately a lot of people believe is real. Patient #151 is one of those people, but Rick Powell is not. What is not a fictional cliché is how dangerous such beliefs are when entertained by the mentally unstable. This story perfectly and in an entertaining manner illustrates this danger… which is exactly why we published it in the April 2014 issue of Infernal Ink Magazine.”