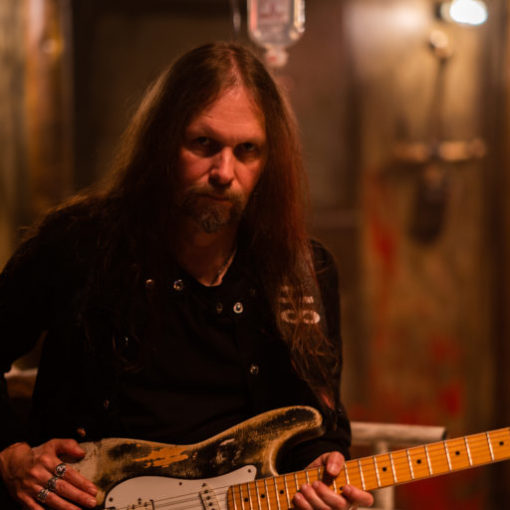 In this special episode of Metal Invaders, host Sonny Bellavance, present a new interview with Andy LaRocque and Mike Wead, guitarists of King Diamond. The interview occured at the MTelus concert hall in Montreal (2019-11-12), one hour before the show… In this short but great conversation, they talked about the current North American Tour, about the coming King Diamond’s album The Institute and more… Stay Heavy! Stream Metal Invaders: Episode 144. Download Metal Invaders: Episode 144.

METAL INVADERS EPISODE 142: “A HALLOWEEN HASSLE AT GIMPULA’S CASTLE” This week, Count Gimpula takes over the show and hosts a Halloween party, with one too many Bloody Marys, with predictable results, for over an hour of Halloween themed hijinks. Special Halloween logo by Druciferi Excelsi! Only on Radio Free Satan!

Metal Invaders episode 141: The Devil Made Me Do It! After a long hiatus, DJ Hell On Wheels returns to hosting duties on the showWith thanks to Warlocks J Nothing and David Ingram for filling in during the Hiatus. Only On Radio Free Satan!

RADIO FREE SATAN:  METAL INVADERS #138 This episode of Metal Invaders is brought to you by Warlock JNothing. This episode he plays you the sounds of: Crematory, Nattas, 6 Prong Paw, Debauchery, Mudvayne, Amon Amarth, Suicide Silence, Whitechapel, The Acacia Strain, Bury Me Breathing, Breakdown, Lightning Swords of Death, Ancient Drive, and finishing up with some Damageplan. Radio Free Satan is a podcast network owned and operated by members of the Church of Satan. Listen to more curated music, comedy, commentary and interviews at radiofreesatan.com. Radio Free Satan on Facebook Radio Free Satan on Twitter

New Podcasts This Week on Radio Free Satan! THE METRO #338 This week on The Metro, Warlock JNothing brings you the sounds of some rock from the 1980s with the following bands: Bob Seger, Bryan Adams, Tom Petty And The Heartbreaker, Stevie Nicks, Billy Joel, Heart, Journey, Night Ranger, Dire Straits, Fleetwood Mac, Phil Collins, Elton John, and finishing up with some Supertramp. METAL INVADERS #137 This episode of Metal Invaders is brought to you by Warlock JNothing. This episode he brings the chicks to the forefront with the following bands: Nightwish, Otep, iwrestledabearonce, Arch Enemy, Butcher Babies, Cycle Sluts […]

Radio Free Satan:  Metal Invaders, With Guest Host Warlock David Ingram David steps in once more to help out and brings a subtle slice of his adventurous archive to the turntables. Listen in to hear some Evil, Motorhead, Slade, Bathory, Ian Gillan, Twisted Sister and more. There’s probably a couple of frosty ales imbibed along the way, too. Only on Radio Free Satan!

NEW PODCASTS ON RFS: METAL, CLASSICAL, COMEDY, SOCIAL COMMENTARY, ROCK, PSYCHOBILLY, INDUSTRIAL, HORROR FICTION, AND MORE! This week we have Citizen JNothing covering three shows, including a new format along with 80’s hits on The Metro, a new episode of Metal Invaders, and Industrial/EBM on The Sanitarium. Magister Bill M. turns to George Carlin for political commentary on The Devil’s Mischief, we pour some hellfire in memory of Patsy Cline on Clint Mephisto’s Road Show, Magister Paradise attacks the culture of offendedness and censorship on The Accusation Party, Warlock Gene plays classical and choral performances on Vox Satanae, M.D. Roche […]

Metal Invaders Gluttony Day Special This week, Dj Hell On Wheels ditches the turkey and gives you something else to be thankful for by serving up a heaping helping of Metal! Only on Radio Free Satan!

This week,  Dj Hell On Wheels returns to the mighty shores of Hellas with more Hellenic metal, for well over an hour of music—only on Radio Free Satan!

This week, DJ Hell On Wheels plays some requested Morbid Angel and various other tracks. Only on Radio Free Satan!