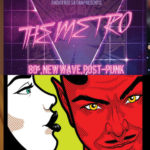 This week on The Metro, Warlock JNothing brings you the sounds of some rock from the 1980s with the following bands: Bob Seger, Bryan Adams, Tom Petty And The Heartbreaker, Stevie Nicks, Billy Joel, Heart, Journey, Night Ranger, Dire Straits, Fleetwood Mac, Phil Collins, Elton John, and finishing up with some Supertramp.

This episode of Metal Invaders is brought to you by Warlock JNothing. This episode he brings the chicks to the forefront with the following bands: Nightwish, Otep, iwrestledabearonce, Arch Enemy, Butcher Babies, Cycle Sluts From Hell, Lita Ford, Epica, Lacuna Coil, Benedictum, Semblant, Delain, Xandria, and finishing up with some September Mourning.

This week marks the end of themes, but not the end of great music! We’ve got Grendel, Eden Synthetic Corps, and much much more! This week we’re cookin’ up a whole batch of strange so strap in and enjoy.

Since new shows have been every 2 weeks (a temporary measure) then there’s a plethora of submitted tracks piling up in the MBR archive. Therefore Dave, Bob and Kent dedicate an entire show to filtering the funk from the junk…with a couple of extra goodies thrown in to keep Dave on his toes. Some drinks were imbibed so it all gets a tad wet by the end. There’s also a guest appearance by Clara the dog who tries to destroy the recording equipment. Everyone’s a critic. Listen in (if you dare) if you’re a member of: CONFLICTED, RIPPER, SIX REASONS TO KILL, MURDER MADE GOD, CASKET ROBBERY, SURTUR, THROES, WARKULT, PROCREATION, MEFISTO, FOUL BODY AUTOPSY, RABID BITCH OF THE NORTH, NORHOD, SUBLIME EYES, EXCRUCIATION, BROKEN TEETH, TKO/THE RODS, IRON JAWED GURU and HAIL OF BULLETS.

Brand new, unreleased, religion-bashing comedy from DAVID CROSS!  Also hear GEORGE CARLIN explicitly attack ultra-liberals and “the dream world of politically correct speech” as he reads some excerpts from his book “When Will Jesus Bring the Pork Chops?”, plus the classic improvised comedy of MEL BROOKS.