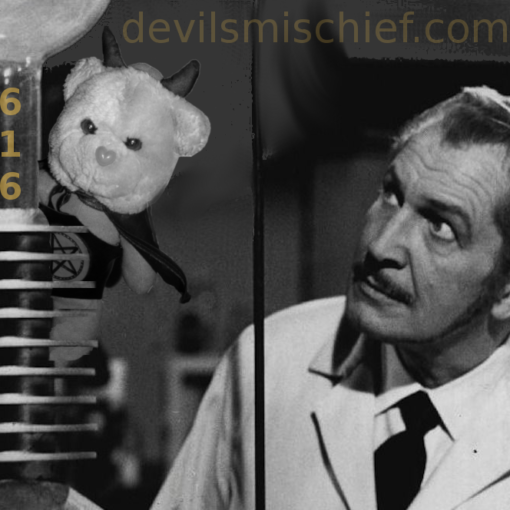 HERE WE GO AGAIN?  “Satanic” Graffiti in Amityville  This morning I awoke to news stories proclaiming that three churches located in North Amityville in Suffolk County on Long Island were vandalized with SATANIC GRAFFITI. Apparently, some time Saturday night, a vandal scrawled on the external walls of the Amityville Full Gospel Tabernacle, the Shaw Temple AME Zion Church, and the Zion Gospel Church, all close to one another. Oddly, none of the major news reports, which include ABC’s Eyewitness News account, show any of the graffiti. However, it was explained in other reports that the offending graffiti was painted over […]

Radio Free Satan:  DARK VOICES – EPISODE 005 – THE SATANIC WITCH PART III “In this episode of Dark Voices, I talk to Natasha Nacre; a gifted performer and witch. In this interview, we discuss changing one’s appearance to bewitch others, we break down the chapter “E.S.P. Extra Sensual Perception” and talk about each of the senses, we discuss Natasha’s long list of careers and talents, we discuss the importance of looks and the Law of the Forbidden, and much more. This is one interview that is definitely not to be missed.“ Radio Free Satan is a podcast network owned […]

Which Witch? —Magus Peter H. Gilmore (Please note—this essay includes “spoilers” regarding plot points of Robert Eggers’ new film THE WITCH) The truism that “everything old is new again” is touched-upon in Anton LaVey’s Seventh Satanic Sin: “Forgetfulness of Past Orthodoxies.” It should be recalled that in Satanism, our “sins” are behaviors which we wish to avoid, rather than acts forbidden by some supernatural entity. In this case, if we aren’t aware of what has gone before, then we can be duped into thinking we are being given something fresh, as the marketers of such goods would have us believe, when […]

9sense Podcast proudly presents Get to Know the Voices of 9senseWitch Zaftig Witch Zaftig will be live and on camera with host Reverend Campbell answering listener questions for one hour only! Tune into YouTube.com/9sensePodcast Saturday, August 8th at 7PM EST for an intimate discussion with this exemplary scholar of religion and Church of Satan Witch. 9sense Podcast has been at the tip of the Satanic podcast spear since it’s debut episode in February XLVI A.S.(2011 C.E.). 9sense positions itself as A Satanic Perspective of Our Modern World and has drawn some of the most talented and controversial Satanists as contributors. […]

TERROR TRANSMISSION EP121: The City of the DeadThe basis of this scary tale is in reality. And the reality is that, once you check into the horror hotel, you’ll be locked in your room with two cloaked gents chanting some ungodly commentary on the 1960 release of The City of the Dead. So, before you’re sacrificed on the altar, you’ll have some time to consort with film facts, Danzig’s child-frightening forehead, metal band names in this film, “Dick"s, city vs. town, TV-watching as social curiosity, girls who wear your clothes after sex, Matt’s welding woes, Jason’s parrot traumas, the British […]

At the Brooklyn Museum in New York, a special exhibition is celebrating the art of the high-heeled shoe. “Killer Heels” reminds me of Magus Anton Szandor LaVey’s essay, “The Witch’s Shoe as Weaponry,” in which he suggests methods for utilizing this icon of feminine power as an actual weapon of self-defense. LaVey also details the aesthetic magic of high heels in The Satanic Witch. “Killer Heels,” open until February 15, 2015, is surely a worthwhile pilgrimage for witches and any other, ahem, enthusiasts. Satan Speaks: http://www.amazon.com/exec/obidos/ASIN/0922915660/churchofsatan The Satanic Witch: http://www.amazon.com/exec/obidos/ASIN/0922915849/churchofsatan – Warlock M. Mandrake

When Magus LaVey said, “Satanism demands study—NOT worship,” he defined the Satanic standard that Magus Gilmore has termed “the Magic of Mastery.” The very idea of study has long been so closely associated with witchcraft that the witchy word “glamour” is derived from the same word as “grammar.” The Latin term “grammatica,” meaning learning or scholarship, often had occult implications during the Middle Ages. The same word also gives us “grimoire,” weaving a web that supports the principle of eclectic studies as the foundation of all magic. So whatever your speciality (to channel Minnie Castevet), remember the magic that dwells […]