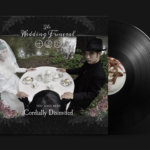 The Wedding Funeral October Release of Their Debut Full-Length Album, You Have Been Cordially Disinvited

The Wedding Funeral announces the upcoming release of their debut full-length album, You Have Been Cordially Disinvited, during the entire month of October. The release begins with an exclusive pre-release tour that will span from New Jersey to Kentucky and then culminate in the official release on Halloween with the release party in Salem, Massachusetts.

The Wedding Funeral is the brainchild of internationally touring, alternative punk-blues musician Darren Deicide and choral-trained Ethel Lynn Oxide. Their 4-song debut demo, Beneath the Floor Boards (Covered in Feces), was released exclusively at theweddingfuneral.com to positive reviews calling it “both haunting and alluring all at once” and “like the best tales told around a campfire”. Advance copies of the album will be exclusively available at the select dates of the pre-release tour. On Halloween, the album will be officially released online and will be celebrated at Gulu Gulu Cafe in Salem, Massachusetts. You Have Been Cordially Disinvitedwill be available at theweddingfuneral.com and at live shows only, in vinyl and digital formats. The full digital album will include a unique Wedding Funeral pendant.

The schedule for the upcoming October release dates can be found at theweddingfuneral.com and will be continually updated as new dates are booked.

About The Wedding Funeral

The Wedding Funeral is the brainchild of internationally touring, alternative punk-blues musician Darren Deicide and choral-trained Ethel Lynn Oxide. Using vernacular and primitive instruments, including musical saw and 3-string diddley bow, The Wedding Funeral weaves tradition with contemporary gothic sensibilities to create a sound that one review called “both haunting and alluring all at once”. “The Wedding Funeral is the kind of music that evokes imagery. Like the best tales told around a campfire, or in the dark under a blanket—you feel like you are being let in on an ancient secret that raises the hair on the back of your neck, and draws tears from your eyes because you refuse to blink lest you miss a single second,” says Speak of the Devil. Their first demo recording, Beneath the Floor Boards (Covered in Feces), is 4 songs and was released over the span of October to November 2017. “They gave us four songs, four songs that you will love or hate. There is no in-between. I have played this demo to an eclectic mix of friends. Some hated it, most of them loved it. And even the ones that hated it, told me there was something about these songs…something they couldn’t grasp, something eerie…and eerie it is!” says Old Style Music Nights. October of 2018, they release their debut full-length album, You Have Been Cordially Disinvited, exclusively at theweddingfuneral.com.