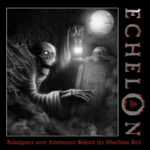 Citizen David Ingram has been a diligent Devil. After the recording of the latest DOWN AMONG THE DEAD MEN album “Exterminate! Annihilate! Destroy!” (out November 6th on Cyclone Empire Records) he, and his close ally Rogga Johansson, continued writing together and the result is the debut album from ECHELON titled “Indulgence Over Abstinence Behind The Obsidian Veil.” The album, which David dedicates his participation on to the Church of Satan, is out now on Metal Inquisition Records and two tracks are now streaming for your listening pleasure (1 & 6 below). There is also a Facebook page which will give updates on future releases.

Track listing:
1. Adversary
2. Ever Forwards
3. Carnal Absolution
4. Cadre
5. Echelon
6. Indulgence Over Abstinence Behind The Obsidian Veil
7. The Impious Of The Perverse
8. Regenerative Genesis