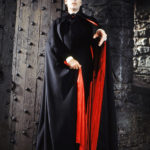 What an impressive body of work has been wrought by this man of imposing height, sonorous voice and mesmeric eyes. Later in his lengthy career he won admirers from a broader public with his adept portrayals of Saruman and Count Dooku in two of cinemas most successful franchises, but he long had been celebrated for his work by horror aficionados for his potent villains. I first recall seeing him in that gem of a film CITY OF THE DEAD (aka HORROR HOTEL) in which he played Professor Alan Driscoll, associate of the witch Elizabeth Selwyn who maintained her immortality via sacrifices to Lucifer. Lee later played Lucifer as the boss of our own Warlock Sammy Davis, Jr., in the pilot for the comedy POOR DEVIL. Lee also capably played both Mycroft and Sherlock Holmes, a unique achievement for an actor.

Most indelibly for me was Lee’s personification of Count Dracula in the wonderfully lurid films produced by Hammer Studios. While he played Frankenstein’s monster first for their revival of the earlier Universal icons, he became Stoker’s immortal aristocrat in 1958 with an extraordinary performance. When Dracula first appears to Jonathan Harker, who is a deputy tasked with investigating outbreaks of vampirism by Van Helsing, Harker—as well as the audience—was surprised to be greeted by an articulate, intelligent man who seemed far from being some monstrous blood-sucker. However, soon enough Harker would see the beast unleashed as the elegant, black-draped count confronted him as a snarling savage bearing feral fangs, face smeared with blood. The contrast between controlled stillness and raging animal fury exemplified Lee’s interpretation of the vampire count. While he could speak with resonant eloquence and act as a monolithic masculine presence, seducing his female victims with a dominant glance or a commanding gesture, when enraged he was fury unbounded. In his second Hammer film, DRACULA, PRINCE OF DARKNESS, he is an eidolon of vampirism, uttering no dialogue. He did not require any to be the incarnation of the king of the vampires.

For we who are not fans of Christianity, Lee’s turn as the pagan Lord Summerisle in THE WICKER MAN, the brilliant horror film addressing competing religious perspectives, will always be cherished. His confident rejection of the myth of Jesus to faithful Sergeant Howie is an enduring delight. His early career had him playing dark roles in many European films, notable being Bava’s S&M gothic THE WHIP AND THE BODY, as Erich—scarred servant to a crazed Nazi in THE VIRGIN OF NUREMBERG (aka HORROR CASTLE) and as Count Regula in the surreal THE TORTURE CHAMBER OF DR. SADISM. There are so many films enriched by his presence that one should peruse his vast filmography to fully grasp the range of Lee’s acting.

Sir Christopher Lee is one of the immortals in that pantheon of actors whose work has touched all with a love for the magic, mystery and magnificence that can be conjured by the cinematic play of light and shadows in which his essence shall exist forever. Hail to thee, Christopher Lee, with love and admiration as deep as those whom you conjured with your consummate skills!