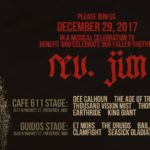 My friend Jim Forrester, affectionately known by the name Rev. Jim, was murdered by strangers while talking on the phone with his wife outside of his work at The Tattoo Museum in Baltimore City. Jim was former bassist for Sixty Watt Shaman, currently of Foghound and Serpents of Secrecy.

Video of the suspected killers has been released: http://baltimore.cbslocal.com/2017/12/22/fells-point-murder-video/

He leaves behind a wife and two children. A GoFundMe was set up to help with the financial burden this loss brings: https://www.gofundme.com/funds-for-forrester

There is also a benefit show tonight at Cafe 611 & Guido’s Speakeasy, located on N Market St, Frederick, Maryland. This event will feature 13 bands on 2 separate stages. All proceeds go to his family.

There is a significant and growing reward for information leading to the arrest of his killers. The Church of Satan’s philosophy advocates Lex Talionis, the law of retribution. Justice will be served when his killers are punished to the full extent of the law.