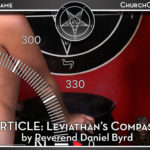 by Reverend Daniel Byrd
an article for The Black Flame—May, LI A.S.

Over the years while making hand-painted Sigil of Baphomet Altarpieces, I’ve gotten a few questions concerning the importance or significance of setting up one’s Satanic Altar against a west wall. If the ideal wall for one’s altar happens to be north, south, or even east, will their rituals suffer? The short answer is no, unless you let yourself overthink it.

The inspiration for using the west wall for Satanic Rituals comes from the tradition dating back to early Christianity of constructing the apse and altar of their basilicas and cathedrals positioned toward the east. The priest generally faces “ad orientem” (“to the east”) so that he and his flock may pray in the direction of the Holy Land; the location of their redeemer’s presumed return; or enjoy the light of the risen Christ as represented by (a rather pagan) rising sun. Other white-light religions have used east for their own “righteous” reasons as well.

West is more appropriate for Satanism since we Satanists literally turn our backs on such sanctimonious drivel, leaving it behind us so we may revel in the mysteries that lurk in the darkness of night that so many fear. As such it’s not hard to understand why, especially for newly self-discovered Satanists who may still have some religious baggage they’re shaking off, this can be an important detail worth fussing over.

But for a more practical reason for using a west wall, we know from The Satanic Bible that the Hebraic characters around the Sigil of Baphomet spell “Leviathan.” Leviathan is also the final name called after the other Princes of Hell have been beckoned from their respective cardinal points (see step seven of “The Thirteen Steps” for Satanic Ritual in The Satanic Bible). As such, when facing a Satanic Altar that is “true” west, we call the final name of Leviathan from this direction while simultaneously facing the name “Leviathan” inscribed around the Sigil of Baphomet, and conveniently remain in this position for the duration of the ritual.

Regardless, you’ll be just fine wherever you choose to set up, even if you have to add an extra turn to face the altar again after calling the Princes of Hell. Magus LaVey included the words “if possible” in The Satanic Bible when instructing us on using a west wall so that even the most by-the-book personality could find some wiggle room if such a wall is just too impractical or even impossible. Magus Gilmore, in his book The Satanic Scriptures, points out, “[Facing west] is not obligatory and any direction may be utilized by the Satanist. You might even try focusing your ritual in different directions, should that bring enhanced stimulation.” Even Christians use “liturgical east,” which designates the location of their altar as “east” for purposes of their ceremonies regardless of what direction it may actually be (even west!) when topographical limitations during the building of their structures made using “true” east impossible.

But for the Satanist who really has his or her heart set on having the perfect altar against a west wall, one simple (and fun) solution is to create a “Leviathan’s Compass.” This is a tool to affirm that your altar is “west” for purposes of ritual and ceremony regardless of what actual compass point it may be in.

It may take any form. You may fashion it into the style of a traditional compass rose with west designating the direction of your altar, or perhaps create something of a symbolic “azimuth mark,” with representations for “west” such as the example provided. Otherwise, you can build it or draw it yourself; make it as elaborate or as simple as you’d like. You may display your compass or marker on the wall or place it directly upon your altar. Choose a location and a design that are most accommodating in relieving that directional dilemma, and I recommend using the “Satanic Rite of Dedication” outlined in Magus Gilmore’s The Satanic Scriptures to enhance its authority.

If you can’t alter the cardinal points of a compass inside something called the “Intellectual Decompression Chamber,” you don’t stand much of a chance altering much else, either. Suspension of disbelief is essential for Greater Magic. As such, west is exactly wherever you say it is. A “Leviathan’s Compass” can help you effectively make a west wall out of any wall in your lair that is most fitting for the aesthetics, secrecy, convenience, or any number of advantages you may require for your altar—without you feeling as though you’re fudging things or making it up as you go.

Now you can work your magic assured that you are facing the retreating sun, turning your back on the hypocritical deceit of white-light religions, and will “command the forces of Darkness to bestow their Infernal power” upon you!