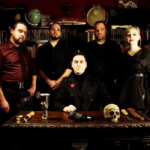 From the Heathen Harvest review of Awen – Grim King of the Ghosts:

Grim King of the Ghosts is the second album from the American neofolk project Awen after their 2009 debut The Bells Before Dawn, though the band has had much activity in the intervening years with limited singles and compilation appearances. The album was released on the Italian Old Europa Café label in a digipak format with a pressing of 300 copies. It contains thirteen tracks, totaling fifty minutes of music that straddles the neofolk and martial genres, with hints of dark ambient/industrial.