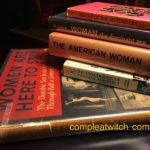 In his ground-breaking book The Compleat Witch, later re-released as The Satanic Witch, Magus Anton Szandor LaVey celebrated the power women have to move the world according to their wills. The bibliography to this work includes many rare and obscure books about human behavior—a look into his personal library as used to formulate potent principles which he felt could be utilized by any women who understood them.

Reverend Byrd has created a web page documenting his recreation of LaVey’s library through the volumes set forth in this bibliography. There is much to savor amongst the titles, hidden gems of erudition! From the site:

“The Compleat Witch Illustrated Bibliography Project” is a systematic exploration of the ideas and individuals that fueled one of the foundational books of the “most feared religion” — Satanism.

“Satanism demands study, not worship” is the maxim embraced in this effort to crystallize Satanic thought. The project is not a beginning or an end, but an elaborate mid-point, a structure from which to advance.

The project adds annotation, illustrations and reviews of the original bibliography found in “The Compleat Witch” by Anton Szandor LaVey. Now published as “The Satanic Witch,” this book is essential to anyone attempting to understand LaVey’s observations of the human animal.

Hail our passionate Satanic Witches around the world!