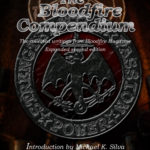 EDITION ESOTERICK PUBLISHING proudly presents the
publication of the expanded second edition of The Bloodfire Compendium
by Reverend Les Hernandez.

“Les Hernandez, founder, guitarist, and
lead vocalist of Honolulu’s only nationally successful punk rock band, The
Quintessentials, is a Reverend in the Church of Satan and a very active and
prolific individual. He was also the editor and publisher of Hawaii’s only
Satanic publication, Bloodfire! Magazine.
It was through Bloodfire! Magazine
that Les really flexed his intellectual muscle, through essays about Satanism,
his favorite author H.P. Lovecraft, and other topics that many Satanists have
similar interests in. The book you are currently holding is a compendium of all
of Rev. Hernandez’s writings, many of which have appeared in the pages of the
now defunct Bloodfire! Magazine and
Rev. Hernandez’s personal website.”

“When Les
talked about HPL, it was evident that he’d actually read him. The influences of
this master of dark fantasy weave their way in and out of Les’ poetry and
music, another reason why I’ve always looked forward to the latest offering
from The Quintessentials. You have to marvel at a primal connection like this,
made between a long-dead, introverted writer from New England and a punk rocker
from Hawaii.”