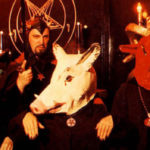 Ritual Magic in the Church of Satan—a Historical Perspective

High Priestess Peggy Nadramia details the history of Satanic ritual magic as developed by Anton LaVey and its application in the Church of Satan. Originally published in DEVIL’S DUE: ESSAYS OF THE ELITE, Dark Moon Press (2016)

Anton LaVey had taken the practice of Satanic ritual magic from therapeutic psychodrama, developing his theories of manipulating the minds of others “through the ethers,” communing with the projection of the Self that he had determined to be Satan, at last to a form of personal magic that either bypassed the trappings of ritual, or functioned within a new environment altogether, such as his music. Regular, repetitive rituals were no different from “church,” LaVey had decided—as participants became too familiar with a routine, their focus wandered, and their emotions failed to engage. To effect change in both the practitioner and in the outside world, rituals had to be fresh, personal and not “by rote.” He never stopped believing in his formulation of magic—“Magic,“ he told one journalist, "is a way of life.”