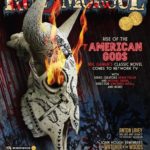 I was recently interviewed by Sean Plummer for the Canadian horror film magazine Rue Morgue. Sections of that interview was used for Plummer’s piece on Anton LaVey and his legacy, and the issue in question can be acquired HERE!

To read the interview in its entirety, please read on.

What does the word ”Satan” mean to you now? And how has that word’s significance evolved for you over the years?

From having been a term that I used ”mechanically”, i.e. via someone else’s definition, I now look at it as a hugely important psychological cluster/complex which always takes on immense historical proportions. Satan is an overall term for a mechanism that makes the world move onwards. For me, the Jungian ”Shadow” is very tied in with this. The more someone represses his own shadow, the more he will live in an ”adversarial neurosis” which means living in a dualistically simplified world-view guided by fear. Satan’s main job is to fuck that up, and is thereby a hugely important energy in human culture. One could look at Satan as an ambassador of human intelligence and ingenuity if you will. The ones suffering from adversarial neurosis as a result of denying their own shadow could – and should – be looked at as mere utilitarian components.

Are you still a member of the Church of Satan?

It has evolved from a youthful interest in all-round ”occult” and weird phenomena to a deeper kind of philosophy and psychology that I’m actively working with on many personal levels.

Read the full interview at carlabrahamsson.com