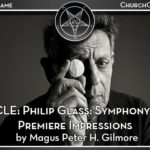 After the completion of his ninth symphony in 2011, Philip Glass felt that he needed to complete a tenth to avoid the “curse” of not getting past nine numbered and completed symphonies alleged to have dogged composers writing after Beethoven and his mighty nine. Of course that is simply a myth and many composers of symphonies move past nine without any problem. The idea may have been originally promulgated by Gustav Mahler. He resisted calling Das Lied von der Erde—a song-based symphony—his ninth, and then he died in the process of working on his tenth (which received a splendid completion by musicologist Deryck Cooke), seemingly confirming his superstition.

So, Glass swiftly completed a tenth symphony in six weeks before the January 2012 premiere of his ninth on his 75th birthday. This work is based on an expanded orchestration of an earlier occasion piece from 2008, Los paisajes del rio, which was written to accompany fireworks for the 2008 Expo Zaragoza. The symphony is thus a bit lighter and more programmatic than its two very dense and abstract predecessors which had departed from the text based symphonies 5-7. With that conceptual barrier out of the way, there was now a freedom to write more symphonies in their own time.