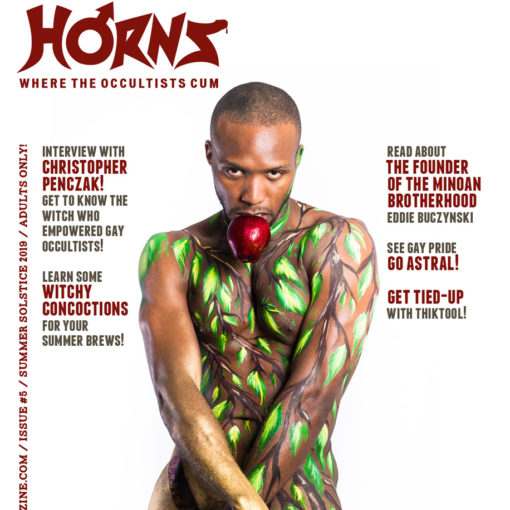 After a year of resting in the ethers, HORNS has emerged to greet the summer with more erotic Queer Witchcraft than ever before. In this issue, you’ll learn about the founder of one of the first Covens for Queer People, the Minoan Brotherhood, Eddie Buczynski. Meet the man who broke down the Broom Closet for all Gay Pagans as we interview Christopher Penczak—author of Gay Witchcraft and The Mighty Dead. Feel your lusty loins growl in heat when you see what our Incubi are up to this issue. You’ll find them celebrating Gay Pride on the Astral Plane, all tied […]

Trapezoidal Roast of Aden Ardennes Hosted by Reverend Campbell Featuring Citizen Patrick DeMarco, Magister David Harris, Witch Heather Height, Reverend M. A. Mandrake, Warlock Darren Deicide, Citizen Tom Saenen & Magister Dr. Robert Johnson. Introduction by Satanist Cameron John Music by Warlock Jeff Bowling Aden Ardennes is a creative powerhouse. His contributions to podcasting with Militant Eroticism were groundbreaking. His first book by the same name, was received better than any Satanic volume in years before or since. And now with his new magazine for gay men, HORNS, Aden has proven himself to be an unstoppable and valuable creator. So lets bring him […]

HORNS: WINTER SOLSTICE  On this Winter Solstice, HORNS Magazine competes with Boreas winter winds! Read about the history of Krampus as well as see him in action with a naughty boy! Read about greasing your broomstick and further your mastery of the Tarot. Take a peek into using edging for scrying and chapter two of DEMON SHOCK. This is the only Gay Grimoire and becoming an ever more powerful sigil for our cock sucking ilk! Get your copy here! Cover Credits: Photographer: BernardGPhotography (IG: @bgphotography2)Models: Bryan Knights (IG: @bryanknight66) and Joelsomeone (IG @joelsomeone)Makeup Artist: Charles Zambrano (IG: @astrobatboy )

HORNS ISSUE #3: HALLOWEEN ANNIVERSARY EDITION! OUT NOW! Within the HALLOWEEN ANNIVERSARY ISSUE the story of Harry Hay, founder of the Radical Faerie Movement and the Mattachine Society. Join us in remembering this Gay Hero! Read our interview with Mat Auryn, writer of “For Puck’s Sake” for Patheos Pagan and prominent Gay Witch! See our Blood Whore Vampire strip down, our 10-inch witch, and punk rock bears going at it! Try our Bondage Spell in LUSTY LITANY! Learn about having sex with the divine and warding in TOOLS OF THE CRAFT! Come on in and kick back with your dusty […]

HORNS Issue 2: Summer Solstice—Out Now! HORNS is truly where the Occultists cum—the world’s first homoerotic magazine that explores the shadowy world of witchcraft, sorcery, and our homo heritage. Within the SUMMER SOLSTICE ISSUE, you’ll find the story of Lige Clark, a mostly forgotten gay hero that we wish to  honor as this issue’s FAGGOD. Try this issue’s LUSTY LITANY, a Seed Anointing Spell! Cum & Candles, oh my! We interviewed the incredibly talented St. Jinx, see exclusive pieces of his homoerotic rendition of the Tarot! Read about the Goddess of Beer: Ninkasi. See our sexy Incubi in a tribal dance with […]

HORNS Magazine has released new content! As Issue 2 of the only Homoerotic Occult magazine is wrapping up, we have released some new articles on www.hornsmagazine.com to wet your whistle. ·      A review of Justin Symbol and the God Bomb’s new music video “Godhead” ·      Reviews of New Moon Witchery’s occult items ·      Check out HORNS Contributors! We know that we’re not the only Queer Occultists and we aim to shine a light on our corner of Gay Culture with the  “WHO HAS HORNS?” articles; tell us about yourself on our tumblr page and you could be featured in HORNS Magazine!  […]