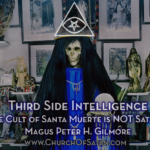 The Cult of Santa Muerte is NOT Satanic

Recent articles dealing with rape, kidnapping and murders involving members of the Salvadoran
MS-13 gang in Houston are sloppily referencing their “shrine” and beliefs as
being “Satanic,” since they seem to involve images of what investigators
describe as “the grim reaper.” Of course we Satanists have far too often
experienced members of law enforcement and the press mischaracterizing
religions with which they are not familiar, particularly if they themselves
have a Christian background.

While the articles we’ve seen have so far have not described the gang members’ makeshift shrine in detail, it is reported that
they tattooed an image of “the grim reaper” on one of their victims and that an
offering of a cigarette was made to the shrine. To anyone familiar with the
syncretistic religions that have arisen in the Americas, this evidence points
to the gang being members of the Cult of Santa Muerte,
a fast-growing religion in Central and South America.

Santa Muerte is represented by a female
embodiment of death and figures of her—a skeleton in a robe which can be of
various colors with a scythe and or hourglass—are readily available in many US
stores in Hispanic neighborhoods which vend imported religious figurines.
You’ll see this avatar of Death alongside statues of Christian saints as well
as Jesus. This figure is said to be a syncretization of Aztec death gods with
the images of “death triumphant” that proliferated in plague ridden Europe
during the middle ages. Adherents of this cult believe that this “saint” can
grant wishes by performing miracles. While the veneration of this figure and
combination with European and Aztec imagery may have commenced during the
Conquistadors’ conquests, it was an undercurrent which only has seen widespread
growth since 2001, with a church dedicated to her having been founded in Mexico
during the late 2000s by David Romo, who was in trouble with the law in 2011.

This folk religion is considered by some to
be the fastest growing religion in Central and South America with an estimated
over 12 million adherents. Offerings are made to the enshrined figures of cigarettes, flowers, fruit, incense, water, alcoholic
beverages, coins, candies and candles. According to Mexican authorities
veneration of “Our Lady of the Holy Death” is common amongst people involved in
drug trafficking and other criminal activities, so the gang members in Houston
are quite likely involved in this form of belief. This article on Wikipedia
covers the topic with some depth.

I urge journalists and law
enforcement officials to do research and contact scholars of religion before
mischaracterizing followers of non-mainstream religions. While the Catholic
Church and other Christian sects stand strongly against this rising belief,
that does not mean that it is associated with Satanism or should be
characterized as being Satanic. Far too long have Christians deemed any
religion that is not their own to be “of The Devil” but that is simply
narrow-minded and bigoted thinking.

Satanism is a carnal, atheist religion which advocates that its
members be law abiding as they embrace the social contract of living in an equitable
society and it demands that criminals should be punished with the sentence
fitting in kind and degree the acts committed. May these criminals in Houston
be held accountable for their crimes, but it must be noted that their spiritual beliefs and illegal
actions have nothing whatsoever to do with Satanism.